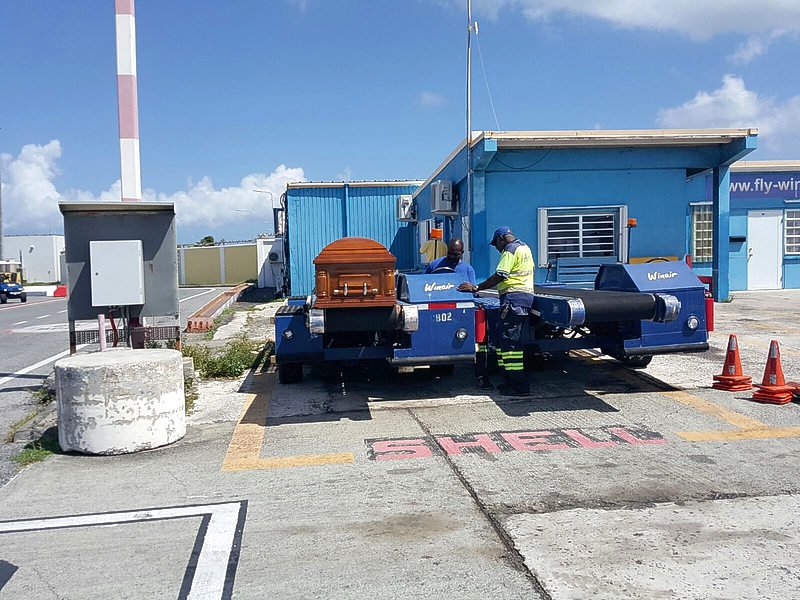 ST. EUSTATIUS–Health Insurance Office ZVK is responsible for the repatriation of the mortal remains of patients from the Caribbean Netherlands, who passed away in hospitals in Colombia or elsewhere. These transports do not always go as planned, which leads to tension and stress among family members of the bereaved. The Cuvalay family in St. Eustatius does not accept it anymore, and is calling ZVK, which falls under the Ministry of Public Health, Welfare and Sports, to account.

He recently retired as operational manager at NuStar Statia Terminal. Together with his wife he ran ARC Agency, which annually organised a Christmas Extravaganza for Statia’s children. The well-known and respected Statian was interred on September 15.

The repatriation of his body from Curaçao to St. Maarten was delayed, reportedly because the correct paperwork was missing. According to the family, which sent official complaints to ZVK, Windward Island International Airways Winair and Emerald Funeral Home, this was “incomprehensible” because the body’s transport from Colombia to Curaçao had passed without a glitch with the use of the same documents. Copies of their complaints have been sent to Minister of Public Health Edith Schippers and to the Dutch Parliament’s Second Chamber.

The family on Statia was informed about the delay per email, and remained in uncertainty for a long time about the question whether the body would arrive on Statia on time for the ceremony.

Upon arrival in St. Maarten, the coffin with the body stood in the blazing sunshine on the tarmac for hours. The initial 10:00am flight from St. Maarten to Statia was cancelled by Winair and rescheduled for 90 minutes later. However, the family on Statia, which had already gathered at F.D. Roosevelt Airport to witness the arrival of the chartered flight, was not informed about the delay.

The rising temperature inside the coffin caused a premature decomposition of the body, which according to Caribbean culture was to be presented for viewing during the ceremony. Once on Statia, an “unbearable scent emanated from the coffin. For more than an hour family members were busy clearing away body fluids. The colour of the skin was between dark brown and black, which was a traumatic experience for the family,” it was stated in the complaint.

Cuvalay was referred to Colombia for highly specialist medical care. ZVK, which arranged for the medical referral, is responsible for the coordination of the repatriation of the human remains of residents of the Caribbean Netherlands from hospitals abroad.

ZVK is the only health-insurance provider in the Caribbean Netherlands. “Even though much has been improved in recent years, there are still many complaints, also where the repatriation of loved ones is concerned,” the Cuvalay family is stating.

They decided to file a formal complaint with ZVK and Winair in protest of the “inhumane, horrible, undignified and disrespectful manner in which Winair, ZVK and third parties are handling human remains that they have been designated and entrusted to transport,” Arlene Cuvalay said.

She said the turn of events were “shocking and very painful.” The family received much sympathy from families who had similar experiences.

She called upon ZVK to take responsibility and draft procedures for contracted parties involved with the transport of bodies, and to ensure that procedures are followed.

“The Cuvalay family hopes that the events surrounding the passing of their beloved husband, brother, brother-in-law, and uncle will be cause to prevent the same from happening to other families. Human remains should not be dealt with in such an inhumane and respect-less manner. This should not be happening to anybody.”

ZVK has not responded to the complaints to date, the Cuvalays said. Winair is reviewing to standardise the handling of human remains, the aviation company said in a reaction to the family.