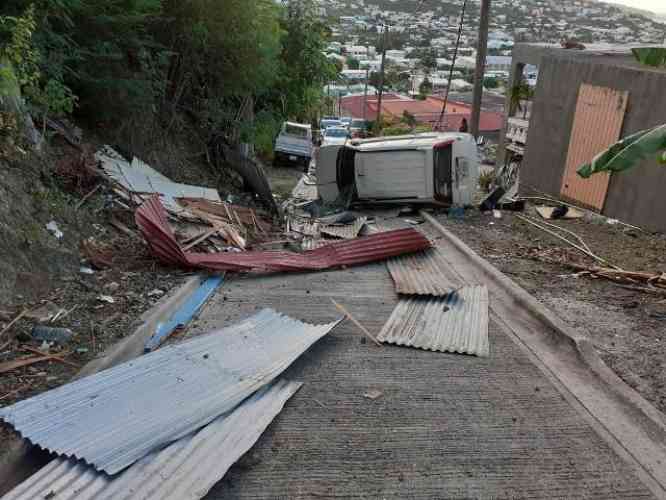 PHILIPSBURG, Sint Maarten — The lady with the Initials B.Y suffered some minor  injuries during a car accident that took place on the Marigiot Hill road early on Tuesday morning November 12th 2019.  According the personnel from the traffic department, the victim was driving up toward the top of Marigot hill and encountered some zinc sheets that were place on the side of the road by unknown persons.

The victim lost control of the vehicle, and flip over after running over one of the zinc sheets that were on road. She was later transported to the St.Maarten medical center after being treated at the scene by the personnel of the ambulance.

The police force if St.Maarten would like to remind the public to place discarded material in such a manner that it does not interfere with free flow of traffic or endanger does who are using the road.

The Special Unit robbery made an arrest of a male suspect with the initials V.O.H early Wednesday morning November 13th 2019. This suspect is being link to an attempted arm robbery that took place on a casino and couple of other businesses a few weeks ago.

On that same evening of the incidents at the casino, a high speed chase took place, which ended on the Arch road nearby the Seven-day Adventist church. Police was unsuccessful that evening of apprehending the suspects, but confiscated the car in which the suspects were driving.

The SUR  is still investigating this case and asking anyone who has any more information, to please contact the Sint Maarten Police Force.

No  serious incidents during the St.Maarten’s day weekend

The Police Force of St. Maarten would like to thanks the public of St.Maarten for a safe conclusion of the 2019  St.Maarten’s day long weekend celebrations. Despite a few very minor incidents, overall it was a very quiet weekend.