Home 721news Aline Hanson at center of an embarrassing case 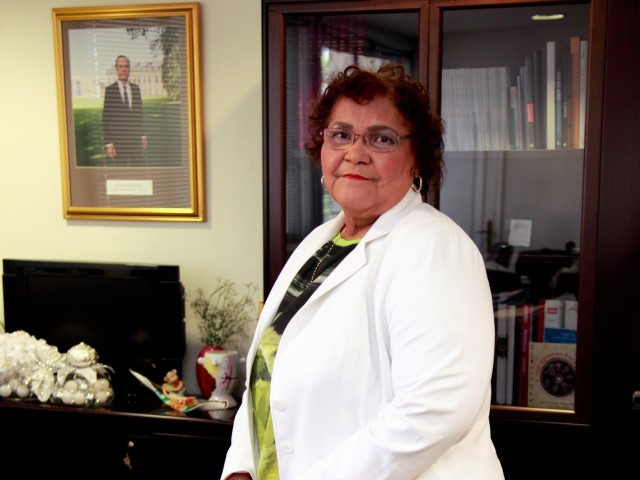 MARIGOT, Saint Martin – A case that falls rather badly for President of the Community of St. Martin Aline Hanson recently came to light.

While the campaign for territorial elections has just been launched, a judgment of the Tribunal de Grande Instance (TGI) of Basseterre, dated February 23, 2017 showed that French justice could have a weakness. Will Hanson refuse to apply the decision of the TGI?

Everything began on August 8, 2016, when a very young resident in St. Martin of Dominicano nationality, and who wished to remain anonymous, (whom we will name Laureen), gave birth to a baby (little Enzo Richards). She decided consciously to abandon her child to the neonatal service of the Louis Constant Fleming Hospital in Concordia.

As the days go by, Enzo Richards, the abandoned infant, who had been recognized by his mother since birth, is the object of attention of several hospital staff. Then a midwife in the hospital decides to take care of the baby.

Chronology of the case

A few days before the end of September 2016, “Alberte,” a married midwife in her forties, decided to take charge of little Enzo Richards, who was then only a few weeks old.

The Public Prosecutor, after being alerted to this case, designates in accordance with French law, an “ad hoc administrator” for the baby. In clear terms, this formalizes the custody of the infant on October 14.

Then on November 3, the juvenile guardianship judge of Saint Martin issued a decree and officially designated the midwife as the “ad hoc administrator” in charge of Enzo. It must be understood, therefore, that for French legislation, Alberte became the “adoptive mother” of the infant, born at the beginning of September, who had been abandoned by her biological mother.

Alberte, on the other hand, had to contact Laureen, the biological mother. The latter, by a notarial deed dated November 10, delegated her parental authority to Alberte. It is then that the difficulties began for Alberte.

Only a month after, on December 16, a new legal decision was made. It came from the same judge of the minor guardians, who then informed Alberte that her function of “ad hoc administrator” had been rejected, and the abandoned baby would be admitted as a “ward of the state.”

Alberte was shocked, she had already been caring for the baby for more than two months, and considered the baby her son. She was obliged to let the baby leave. Alberte, who CCN met, confirmed that this was a hard blow, but she continued to demand the return of her child.

She then learned that the decision to make baby Enzo Richards a ward of the state, was taken by the Community Council of St. Martin, whose president is Hanson.

In the course of the investigation, it became clear that Anne Laubies-Roques, Prefect of the northern islands, is not totally unfamiliar with this surprising decision.

Alberte then decided to take legal action and filed an appeal before the High Court of Basseterre, on the decision, which deprived her of her son.

Against the decision of the President of the Community, TGI of Basseterre set the record straight. Alberte’s appeal was considered admissible. In its judgment of February 23, 2017 the TGI emphasized that the child was not born under X, and was formally recognized by his mother, who, aged 22, had indeed consented to delegate parental authority and entrust the custody of her child to Alberte, before a notary on October 21, 2016. In addition, little Enzo is in good standing with French legislation, since he was already registered and has social security and a passport.

In addition, Alberte has demonstrated that she was able to provide a home with all the care necessary for the harmonious development of little Enzo.

The TGI of Basseterre also stated in its judgment: “It is in the best interest of the child to pronounce the annulment of the decree of August 17, 2016 taken by the President of the Community of St. Martin in quality, and to pronounce the delegation of the parental authority to the benefit of the midwife, with regard both to the will expressed by the biological mother of the child and the bond that was created in the applicant and the child.”

More than two weeks after the proclamation of this judgment, Hanson continues to turn a deaf ear. No one knows when little Enzo Richards be reunited with his adoptive mother.

However, a few weeks before the elections, the leader of “Continuons pour Saint Martin,” who is in the field, knows that sooner or later she will have to comply with the decision of the TGI. This affair during the electoral period, can only be a gift for her opponents.

Will Aline Hanson continue to block, when justice has passed, and the law has been stated?