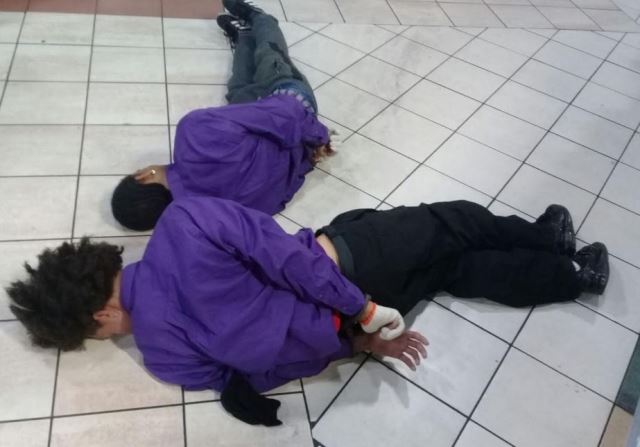 COLE BAY, Sint Maarten — On Sunday March 12th at approximately 06.25 p.m. a call came into the 911 dispatch informing them of an ongoing armed robbery at “Carrefour Supermarket” on Union road in Cole Bay.

Two masked gunmen dressed in dark clothing had stormed into the building and forcefully taken the security guard on duty to one of the restrooms. Immediately several police patrols that were in the area of Cole Bay were sent to the scene to investigate what had taken place.

When the officers entered the building they were confronted by one of the suspects coming out of the restroom with a gun in his hand. The officers summoned the suspect to drop his weapon, but he did not comply immediately at which time one of the officers fired a warning shot.

Both suspects chose not to resist and they were immediately arrested by the officers. They were taken to the Philipsburg Police Station where they are in custody for further. The weapon the suspects were in possession of was also confiscated for further investigation. No one suffered any injuries during this incident.

Due to the quick response of the investigating officers these suspects were caught in the act and this armed robbery was prevented.