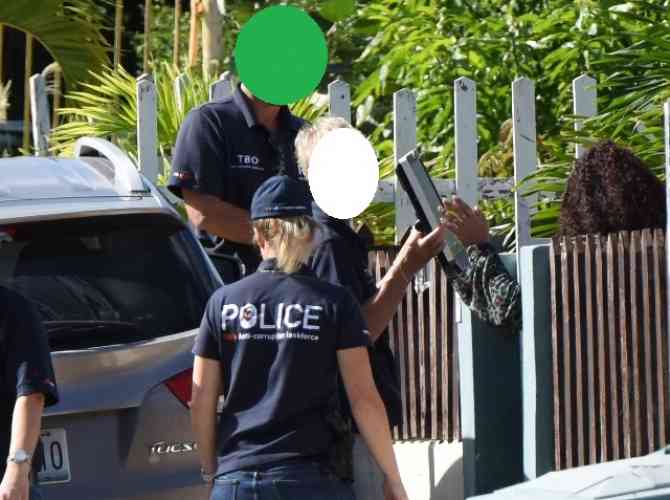 >PHILIPSBURG, Sint Maarten – An investigating team consisting of detectives of the >Anti-corruption Watch TBO/RST led by the Prosecutor’s Office of Sint Maarten, started an investigation of the Bureau Telecommunication and Post St. Maarten (BTP) after the General Audit Chamber (Algemene Reken Kamer) of St. Maarten published a 2015 report on BTP irregularities in their numbers.

Two weeks ago, the investigating team started a fiscal investigation, by visiting with a court order, different telecommunication companies, who have to pay BTP a large sum of money on a yearly basis.

The main purpose was to get the correct figures of what these telecommunication companies have to contribute.

In the same week, Taliesin Construction’s office located in Madame Estate, and the owner’s house were searched.

The owner was questioned by the investigating team. The investigation is based on the cost of the construction of the BTP building, the amount that it was sold for, and consulting fees that were paid for based on advice from other consulting companies, who also advised the St. Maarten Government to purchase the building at an certain price.

The source also told >721news this investigation also looked into the procedure of how changing St. Maarten’s area code to +1721 was handled. The source said that after 10-10-10 the Government of St. Maarten had the choice to remain with area code +599-5, or go under the US system and obtain +1721. Normally, BTP would have to make such a decision, but in this case BTP, at that time was managed by Peggy-Ann Brandon, who was Chairlady and Interim Director, chose to request a 3rd party to handle this.

This company was registered in the name of a staff member of the Duncan and Brandon law office, which is the reason why the house search took place at the law office and home of the staff at Brandon & Duncan Law office.

>So far the investigation is based on:

* The discrepancy in how much the building was sold for.

* The discrepancy in monies coming, and monies that were not accounted for based on the report of the General Audit Chamber.

* The money transaction for the company that BTP used to outsource the changing of St. Maarten’s area code from +5995 to +1721.

>To refresh our reader’s mind below, you can read an article that was published in November 25, 2015 By Today Newspaper.

>GREAT BAY – On November 4, the president of parliament Sarah Wescot-Williams announced a meeting with the General Audit Chamber about its rather alarming report about the Bureau Telecommunication and Post.

The meeting could not be fit in, as planned in the third week of this month and the tentative date is now December 8.

There are plenty of concerns to address: the outrageous salary of director Anthony Carty, the price BTP paid for the building it occupies on Cannegieter Street, the fact that BTP has ten employees and that four of them are managers and the fact that this organization is outsourcing close to everything, like appointing ACTIS NV as the country’s Numbering Resource Manager.

That is a remarkable difference and the question is whether such a salary is justified. Based on the Audit Chamber report it is not because Carty has “no performance contract, little to no accountability and practically carte blanche with his budget:”

it is automatically approved if the responsible minister does not approve it within six months. Not bad for someone who was reportedly welding cables for TelEm at one point in his career.

On February 11, 2013, BTP conducted a remarkable transaction. It bought a building on Cannegieter Street 15 from Carl Critchlow, director of the construction company Taliesin. Rumors that he is in a relationship with attorney Peggy Ann Brandon, a former director of BTP, have been squashed as untrue by Brandon.

The purchase price was, according to the deed this newspaper obtained from the Cadaster, $6.6 million.

Critchlow bought the building fourteen months earlier, on December 1, 2011, from Claudwick Charles Peterson for $700,000. He fixed it up and then sold it to BTP.

One could of course wonder about the purchase price, and Finance Minister Martin Hassink certainly did. He ordered Independent Consulting Engineers (ICE) to appraise the property. The company complete its report on September 9, 2013 – and the minister probably could not believe his eyes when he read it.

ICE appraised the property’s market value – five levels including the roof level with common facilities – at $4.1 million, its auction value at $3.1 million, reconstruction cost at $2.8 million and estimated gross rental income per month for all the five floors plus the rooftop section at $42,000.

BTP occupies the fifth and sixth floor of the building and if the rental value of these two floors is put at $14,000 per month it could at best earn another $21,000 from the three floors below it. BTP did not purchase the empty ground floor – that still belongs to Critchlow.

The Audit Chamber notes in its report that activities related to the transaction (to buy the property) began already in February 2011. Interesting date: Critchlow bought the building nine to ten months later – in December 2011. At that time, Critchlow’s partner Peggy Ann Brandon was Chief Executive Officer at BTP.

According to findings of the Audit Chamber, BTP initially intended to buy only the top two floors, but in the end it bought the whole building with the exception of the ground floor. The space BTP did not need, it intended to lease to the government.

The Audit Chamber wonders in its report “if the acquisition of the building was cost efficient and whether leasing commercial space fits within the scope of operations at BTP.”

Cost efficient it was not – given the fact that BTP forked over $6.6 million for five floors, while the complete building has been appraised for just $4.1 million.

Former director Brandon however, let this newspaper know that there is also an appraisal by David Morrison, who valued the building much higher, at $7.8 million. Morrison was accepted as the appraiser by the financial institution that financed the purchase.

“Soab (the government accounting bureau – ed.) conducted an audit on the transaction and found that all laws and procedures were followed,”

Brandon wrote in answer to our questions. “The decision to purchase a building, and seek financing is by law taken by the minister of Tourism, Economic Affairs, Transport and Telecommunication. In this case the decisions were taken by two ministers, not by my person.”

The ministers Brandon refers to are Romeo Pantophlet and Ted Richardson.

“The acquisition and leasing of the building are extraneous business activities, based on the national ordinance BTP,” the Audit Chamber writes in its report. “Acting as lessor of real estate is a task that must be specifically assigned to BTP by the minister. The Audit Chamber was unable to establish if this occurred.”

It remains also unclear whether there was a budget amendment to make the purchase of the building possible.

When the Audit Chamber wrote its report, the building had no other tenants and BTP was bearing all the costs for the building. By now, BTP has found its first tenant: the Corporate Governance Council will take up office space on the fourth floor and man it with two permanent staff members.

Instead, that numbering plan is now the playground of ACTIS NV. On June 15, 2012, former Minister of Tourism, Economic Affairs, Transport and Telecommunication Romeo Pantophlet signed the national decree that appointed ACTIS as the numbering resource manager for St. Maarten.

ACTIS was incorporated at the law offices of Duncan&Brandon on September 23, 2010, and duly registered at the Chamber of Commerce the next day. Judith de Weever, who works at the offices of Duncan&Brandon, is listed as the director of ACTIS. “The fact that she is in a capacity linked to my firm diminishes in no form or fashion her right to establish a business,” Brandon notes, adding that she does not hold any shares in ACTIS.

Based on Pantophlet’s decree, ACTIS pays $25,000 per year as an “annual regulatory oversight fee.” This fee was first due in 2012 and by now the company must have paid $75,000 in fees. The decree does not specify whether this fee is due to BTP or to the government.

The decree suggests that some things were already in the works before ACTIS was ever established. The decree considers for instance “the decision of the Executive Council dated August 24, 2010.” Less than a month later, ACTIS came into being.