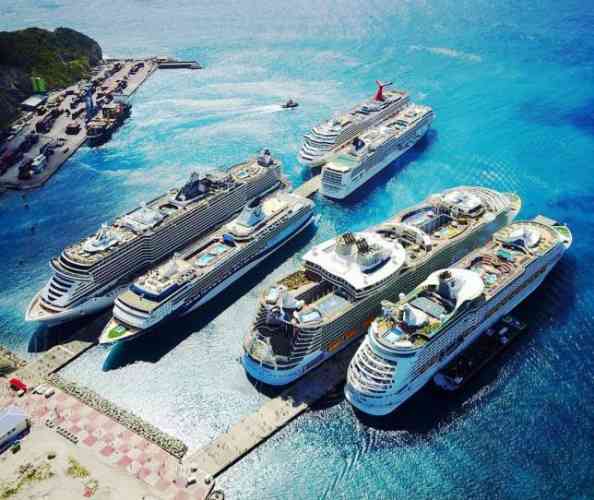 The measures being taken by the cruise lines is to help curb the spread of the virus and keep guests, crew and communities that the vessels visit, safe and healthy.

Port St. Maarten Management said on Friday that it will continue to advise the community of any further information that becomes available regarding cruise line developments.

Port St. Maarten received information that Carnival Cruise Lines is also suspending embarkation cruises for a 30-day period.  Carnival Cruise Line was founded in 1972 and is part of a family of companies owned by Carnival Corporation, which includes sister lines Princess Cruises, Holland America Line and Cunard Line, among others.  The cruise line has 25-ships.

Royal Caribbean Cruises Ltd. also announced on Friday the suspension of cruising in the United States for a 30-day period which would be around April 15. Cruises that depart US ports before midnight tonight (Friday) and international cruises will operate their scheduled itineraries. US ships already at sea will finish their itineraries as planned.

Royal Caribbean Cruises Ltd. is a global cruise vacation company that controls and operates four global brands: Royal Caribbean International, Celebrity Cruises, Azamara and Silversea Cruises. RCL is also a 50% joint venture owner of the German brand TUI Cruises and a 49% shareholder in the Spanish brand Pullmantur Cruceros. Together these brands operate a combined total of 61 ships with an additional 17 on order as of December 31, 2019. They operate diverse itineraries around the world that call on all seven continents.

MSC Cruises informed Port St. Maarten that they have suspended all their cruises departing from Miami and the Antilles starting from March 14 until May 1.  This is due to the worsening situation related to COVID-19.

Costa Cruises announced on Friday that they will voluntarily halt the global operations of ships until April 3.

With 27 ships in service for an overall capacity of around 76,000 guests, the Group is headquartered in Genoa and operates at global level, mainly on routes in the Mediterranean, Northern Europe, the Baltic Sea, the Caribbean, North and Central America, South America, the Arab Emirates, the Indian Ocean, the Far East and Africa.

Windstar Cruises last port of call to the destination will be on March 14.  Windstar has temporarily suspended operations of all sailings embarking on March 14 through April 30, 2020. Cruises will begin operating again according to schedule on May 1, 2020.