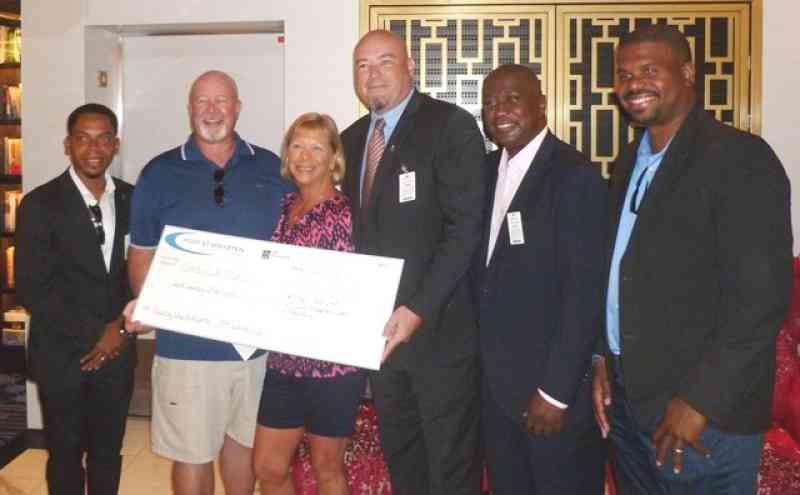 PORT ST. MAARTEN – Carnival Cruise Lines (CCL) newest and largest class Vista ship, Carnival Horizon, made its inaugural call to the destination on Thursday, and is the first inaugural vessel for the 2018-2019 high cruise season. The Horizon carry’s close to 5,000 cruise passengers and 1,470 crew.

During the inaugural call, the one-millionth cruise passenger couple were also onboard and honored for the destination St. Maarten milestone.

Carnival Horizon Captain Luigi de Angelis during the plaque exchange ceremony with Port St. Maarten Supervisory Board and Management officials, said Carnival guests love St. Maarten, adding that he was astonished of how quickly the destination has recovered; CCL was glad to have played a role in getting the island back on track to recover as quick as possible; and that St. Maarten was a preferred destination among Carnival cruise passengers.

Minister Stuart Johnson during the plaque exchange welcomed the Captain, his crew and cruise passengers to the ‘Friendly Island,’ adding that the Government realizes the importance of the cruise industry to the national economy, and that Government is committed to the cruise sector.

The one-millionth cruise passenger couple Cheryl and Tim from Miami, Florida, were adorned with tokens of appreciation and gift certificates from several industry players.  They said they were honored, blessed to be here, and very appreciative of the gifts and added that they would continue to be ambassadors for the island.

Cheryl and Tim said St. Maarten was a comfortable destination and have been visiting the island for more than 15-years with over 260 cruises under their belt.

The first time they came to the island was back in the late 1980s when they came ashore on a tender.  They have been on many cruises, and don’t get off the ship at each destination, but St. Maarten is a must where they get a warm welcome, the people are not pushy, it’s safe and those are some of the reasons that they keep coming back.

They have witnessed the destination grow over the decades and pointed out during the ceremony on Thursday that St. Maarten remains unspoiled.

Cheryl and Tim like to spend time with the locals who they described as amazing people and love the island’s cuisine.

Minister Johnson thanked Cheryl and Tim for their commitment to the destination and he was very pleased that they enjoyed the experiences each time they visited the island.

Minister Johnson said this was a milestone for the country reaching the one millionth mark in cruise passengers, especially after experiencing two hurricanes in September 2017.

“We are a resilient nation whose strength allowed us to bounce back as a destination in order to offer remarkable experiences for our guests despite the challenges as a people.

“We are very appreciative of our guests and I would like to thank Cheryl and Tim for their steadfast commitment to the island on behalf of the Government of St. Maarten and the tourist offices of the Dutch and French sides,” Minister Johnson said on Thursday.

Johnson also recommended to the couple who were to take an island tour to visit Yvette’s restaurant in French Quarter for a special experience in local cuisine.

A CCL onboard representative stated that Carnival Cruise Lines loves St. Maarten due to its excellent docking facilities; and that guests have rated the destination during a survey high on safety.  St. Maarten also scored the strongest where shore excursions are concerned surpassing other destinations in the northern and north eastern Caribbean.

The CCL rep added that the destination is number one for the crew and who prefer the shopping, food and drink experiences as well as the hospitality that they receive from the ‘Friendly Island’ people.

The new 133,500-ton 1,055-foot Carnival Horizon arrived in New York City in May after a 13-day inaugural cruise that started in Barcelona, Spain and kicked off the ships European season that runs through May.

Following its Mediterranean voyages, the Horizon was repositioned to New York for a summer schedule of four-day Bermuda.  Carnival Horizon has now embarked on its six- and eight-day Caribbean sailings from Miami, Florida.

The third vessel in the Vista-class series, Carnival Panorama, is currently under construction and set to debut in Long Beach, California in December 2019.

Carnival Cruise Line was founded in 1972 and is considered — “The World’s Most Popular Cruise Line®” — that carries millions of passengers every year. The first vessel of the Vista-class debuted in April 2016, namely Carnival Vista.

Carnival Cruise Line is part of a family of companies owned by Carnival Corporation, which includes sister lines Princess Cruises, Holland America Line and Cunard Line, among others.

Carnival currently has 26 ships operating three- to 16-day voyages, departing from every coast in the U.S., plus from Canada, Puerto Rico, Europe and Barbados.

While Carnival is best known for Caribbean cruises, they sail to other destinations like Mexico, Alaska, The Bahamas, Cuba, Hawaii and the Mediterranean.

PHOTO CUTLINE: Port presentation; One millionth cruise passenger couple Tim and Cheryl (2nd and 3rd from left) along with Port St. Maarten Supervisory Board and Management representatives on Thursday after presenting a gift certificate to the winners.