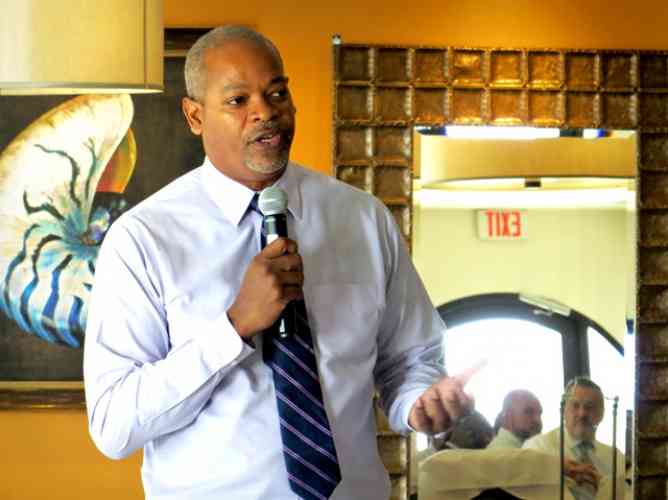 “In this room are the people that are going to make a difference within the law enforcement and security of Sint Maarten in the coming years,” stated Franklyn Richards who acted as moderator during the two-day conference.

During the work conference, participants exchanged views in plenary on the long-term vision within the entire law-enforcement chain and made an inventory of what needs to happen in the short term. The bottlenecks that were discussed in particular in relation to the reconstruction of Sint Maarten after Hurricanes Irma and Maria were: 1. the detention situation, 2. reinforcement of the Sint Maarten Police Force and 3. strengthening of border control. Besides providing a platform for all parties within the law enforcement chain to discuss these matters, the conference also aimed to deliver three tangible results.

The first was to create a plan of approach for the mutual agreement of border control. The Netherlands has two conditions attached to the reconstruction fund, including the drafting of mutual border control regulations. An action plan for the exact interpretation of this mutual arrangement needs to be finalized by the Ministry of Justice Sint Maarten and delivered by February 1st, 2018, to the Ministry of the Interior and Kingdom Relations.

The second and third desired results were to create plans for the detention situation and the strengthening of Sint Maarten Police Force in order to develop the sector and reconstruct the damages created by hurricane Irma. These plans help to explore which aspects have priority in respect to the reconstruction in the coming two years and which aspects possibly can be financed by the reconstruction fund. However, these decisions need to be taken on a political level.

Conference attendees were split in three groups. Each group was asked to come up with advice and solutions regarding the subjects. Once the groups had completed their task, they were called to present a summarized version of their findings.

“We cannot solve all problems within two years, so it is important that we focus on creating a base with the received reconstruction fund which also caters to the development of long-term solutions,” explained Gerard Van Voorst, Chief Inspector Law Enforcement Council, Sint Maarten, who presented findings on behalf of his assigned group.

All suggestions, notes, and action-plans that resulted from the two-day conference will also be provided in full to the Ministry of Justice.

At the end of the conference, Cornelius de Weever, Minister of Justice thanked all participants and expressed that he was very pleased with the draft plans for the recovery and reinforcement of the local justice chain as compiled during the joint conference between the Netherlands and Sint Maarten. “Sint Maarten is dedicated to making every possible effort to strengthening the justice chain and implementing the plans of approach,” he stated.