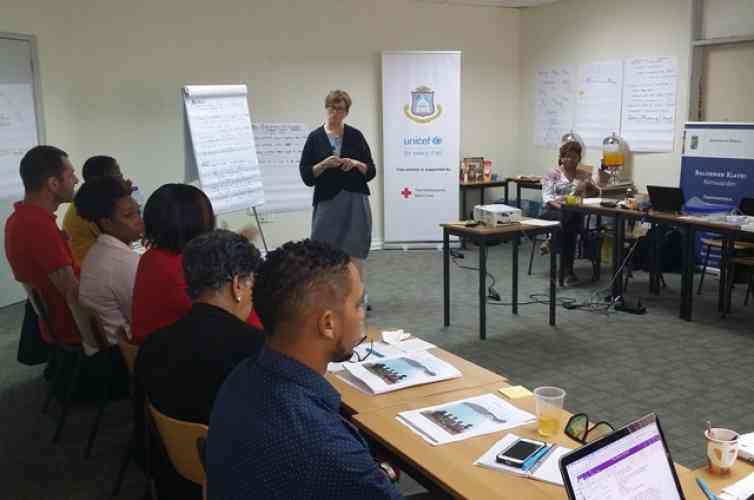 >Philipsburg/Willemstad – In the event of future emergencies, inter-island cooperation regarding the protection of children is important to reduce the risks of children becoming victims of neglect, violence, exploitation and abuse. This was the consensus at the two-day meeting between representatives from the six Dutch Caribbean islands. During the meeting the representatives drafted inter-island protocols on evacuation and care of (separated) children in disaster situations.

“Although it is customary in the region, there are risks involved in sending children off island without their primary caregiver during emergencies. Children are vulnerable to falling into the wrong hands or experience hardship being away from home. It is important to have harmonised arrangements between the islands about registration, legal guardianship and access to services, such as education, when a child has been evacuated,” says Anna Kroon, child protection specialist with UNICEF Netherlands.

The various stakeholders shared their experiences within their role related to Hurricane Irma, identified possible areas of cooperation, and made draft inter-island agreements on how best to cooperate between islands in future emergencies to ensure that children are protected from neglect, violence, exploitation and abuse in times of emergencies.

During the meeting, other responsible stakeholders in the emergency evacuation processes involving children were also identified and follow-up consultations with these stakeholders will be planned.

After hurricane Irma, UNICEF Netherlands was formally invited by the Government of St. Maarten to conduct post-disaster needs assessments in the areas of education and child protection from a children’s rights perspective. Similar assessments were also conducted on St. Eustatius and Saba. The child protection assessments revealed that voluntary evacuations to the other five Dutch Caribbean islands and beyond began before and continued after the hurricane hit with limited procedures in place to register children, assess adults traveling with them, or collect contact information from Sint Maarten or their destination.

The child protection assessments and later meetings on Curaçao, Aruba, and Bonaire held in March this year, revealed that while family unity is one of the highest priority protection concerns, professionals involved in the disaster response desired increased knowledge about the risks associated with family separation and welcomed related inter-island cooperation in the event of future emergency situations.

During the course of this year, UNICEF has supported the Court of Guardianship on St. Maarten with organizing a Child Protection in Emergencies Training to mainstream child protection across St. Maarten’s disaster management system and supported development of the Court of Guardianship’s Disaster Preparedness Plan and a draft Inter-island Protocol to be further discussed and developed with relevant stakeholders.

This work forms a part of UNICEF Netherlands’ recovery project funded by the Dutch Red Cross.