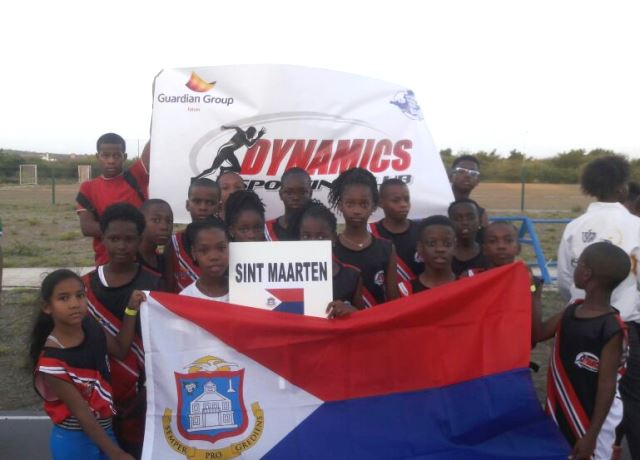 On day  1 were the relays, day 2 track and field events, and day 3 road racing.  A press release from the Dynamics Sporting Club stated that in their first event of the competition their under 11 age category blew the field away by almost 50m in the 4×100 relay, breaking the record running under 1 minute. Unfortunately the team was disqualified because one of the officials signaled a lane violation on the final exchange. The decision was overturned after 2 days of protest and film review thanks to technology, the relay team was then awarded their gold medals during the road race ceremony. The relay team consisted of: Jemar Phillip, Chanel Richardson, Sebastiana Reyes and Jamal Simon.

The under 13 age category  4×100 relay team also blew away the field but was disqualified after a dropped baton on the final exchange.  The under 15 won bronze in the 4×100 relay. The team consisted of: Casmi Phebe, Roshania Benjamin, Annisha George, and Denzel Washington.

“I also competed in the senior 20-34 male competition, where I won 2 medals, 1 silver in the javelin and silver in the discus throw. The medals I won was given to Shaniqua Michelle for perfect attendance at training and Gervani George for never quitting despite the odds and for motivation. They are considered as the coaches medal award recipients, said Coach Abdule Watley.

Coach Watley further stated that he is satisfied with the athletes performance as this sets the platform for the future of athletics on St. Maarten.

“Dynamics Sporting Club has very talented athletes and I will do everything I can to nurture their talent and take them to the next level. I want to thank the parents who made the trip to Curacao and supported the athletes, which gave them that extra boost they needed. I would also like to thank the Secretary of Dynamics Jarisca Martina who prepared meals for the athletes and organized fun filled activities for the athletes as an award for their hard work throughout the season,” said Coach Watley.

The coach is also very grateful to their  sponsors for making their trip to Curacao possible, and they are: Guardian Group Fatum, Asha Steven Hillside School, Princess Juliana International Airport, GEBE, Uts, and Prince Hubert Martina.