Home 721news Fifty season passes up for grabs for Carnival-50 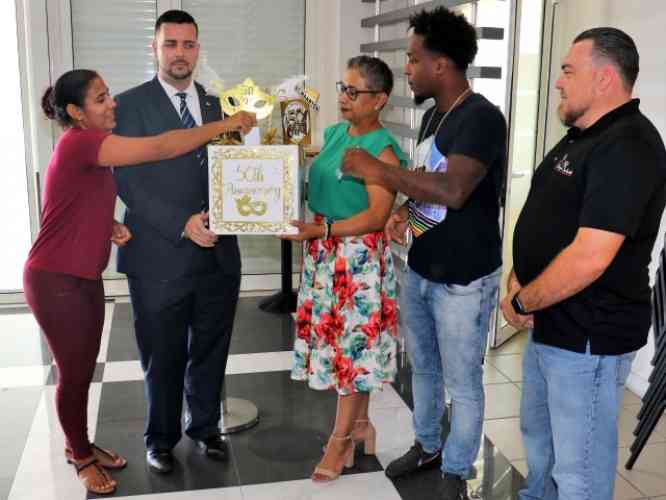 >PHILIPSBURG—The Golden Box has been launched at the Government Administration Building, and the entire island is invited to fill in their Carnival Pass raffle forms and drop them in the box for a chance to win one of fifty (50) season passes for Carnival-50, next year.

Following the launch Minister Johnson also stated that persons can take selfies with the Golden Box and share on the St. Maarten Carnival Development Foundation (SCDF) as well as the social media pages of STB with the hashtag SXMCarnival50 (#sxmcarnival50), for a chance to win additional prizes.

The first two participants in the raffle were captured filling in their raffle forms today which created a buzz and saw many others following their lead.

The general public is invited to come to the Government Administration Building during opening hours (8:00 a.m. to 5:00 p.m.) and collect their forms from the reception desk.

Each candidate is allowed one form and one chance to win. The draw date for the fifty passes is November 30th at the Government Building during which a wide range of entertainment and giveaways are being prepared. Winners must be present on the draw date to collect their passes.

Minister Johnson said during the launch of the Carnival-50 promotion, that the idea is to give everyone an equal opportunity to take part in the upcoming golden anniversary of Carnival. He said the improvement of Carnival is part of the St. Maarten United Christian Democratic Party’s Governing program, and the promotion “shows our commitment to the further development of Carnival and the entertainment industry on the island for our visitors and residents.”

He said the size of the golden box will increase as the number of participants increase. Chun said the idea is to ensure that not only the international community gets information on the planned carnival event for 2019, but the population of St. Maarten as well.

Minister Johnson said, “We cannot simply assume that because the carnival celebration is held every year, people are naturally going to be excited to attend. We have a responsibility to generate the buzz and create the interest so that everyone comes out and support and gets an opportunity to be part of Carnival.” The fifty (50) people who would not have to purchase tickets to enter Carnival Village for the various local and international shows planned for next year can now spend the extra dollars at the booths.

President of the St. Maarten Carnival Development Foundation (SCDF) Alston Lourens said, the foundation welcomes these types of significant initiatives that extend the love of carnival to more people.

Considering that the promotion and improvement of Carnival as our largest annual event is deeply rooted in the Governing Program for this coalition, we also look forward to the different Ministries contributing as well to make Carnival-50 the greatest yet.

Mr Lourens said, “Minister Johnson we know has continued to provide excellent support to the Golden Anniversary of Carnival in whatever ways he can, not just through subsidy.”