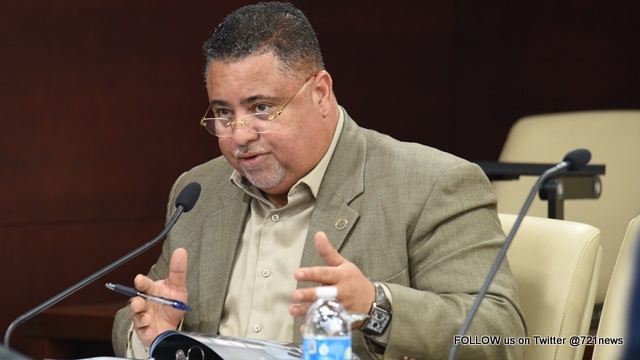 Leader of the US party, MP Frans Richardson, supported by his board, said that the public should pay keen attention to the manipulative ways that Wescot-Williams have been employing the entire course of this year.

Richardson said it is ironic that Wescot-Williams “holds on to the word integrity like a medal” while she has been actively destabilizing government for 8 months. “The DP and its leader continues to make a mockery of the system, and not just now, over the past decade,” Richardson said.

Richardson chided Wescot-Williams for going after and manipulating the younger members of Parliament with mis-information. “This has been a coalition where members had to be constantly putting out fires caused by a sustained campaign of undermining by the DP. It started 8 months ago and culminated last week,” Richardson said.

“Going after young MP’s started long before hurricane Irma. What the storm did, was give the DP an opportunity to play on the information of the people and young MP’s with misinformation. While government is trying to govern in a crisis situation, here comes the DP with its typical irresponsible and undermining actions within the coalition,” Richardson said.

“Much has been said about ship jumping, however there are always two sides, the demand and the supply. Those MPs offering their seat in support (the supply) of a new government have had to encounter demand for the seat(s), otherwise there would be no deal. I have therefore concluded that if there is no demand by parties for jumpers’ seats, MPs would think twice before switching allegiances, because there would be no incentive for them to do so.”

“When you are asking why we would possibly be getting another election, you need to ask yourself why has the DP primarily taken us down this road to another election. Do not let the manipulative leader of the DP get away with trying to fool you,” Richardson concluded.

MP Richardson also reminded that the integrity issue did not start under the leadership of William Marlin. William Marlin, he said, is getting the tail end of a whip that was “cocked back” long before him. “Integrity this and integrity that became an issue under the same people who is now trying to break government again. That is where it started. T

his government has balanced budgets, received positive reports from the CFT and more. None of that was accomplished before. But today we try to paint a picture like it all started with this government. The Democratic Party is trying to deflect from a sordid history that belongs to it and it alone,” Richardson said.