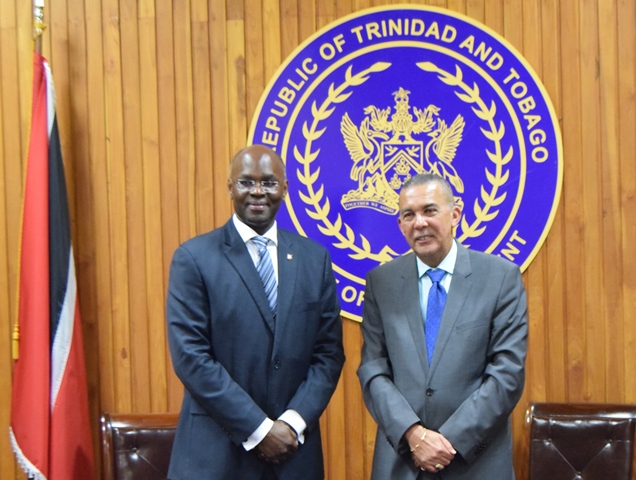 HARBOUR VIEW – Governor Eugene B. Holiday paid a two-day official visit to the Republic of Trinidad and Tobago on June 1 and 2.

The purpose of the visit was to strengthen ties between St. Maarten and the Republic Trinidad and Tobago and promote partnership and cooperation in the Caribbean region.

During the visit Governor Holiday was received by President of the Republic of Trinidad and Tobago Anthony Carmona, at his presidential palace. At a gathering, the President and the Governor, recognizing that youth are the executives of tomorrow, talked to school children about the importance of education, international relations and collaboration between countries for the development of one’s country.

Governor Holiday also met with Minister of Foreign Affairs and CARICOM Affairs Dennis Moses. They discussed issues of mutual interest including the potential for cooperation and St. Maarten’s participation in the region.

In his meeting with Minister of Education Anthony Garcia, he discussed the possibilities of cooperation between St. Maarten and Trinidad and Tobago in the field of education and exchanged views about nation-building through education. The Governor also held discussions about the organisation of the judiciary with the Chief Justice of Trinidad and Tobago Ivor Archie, and Justices of the Caribbean Court of Justice.

His program further included discussions with representatives of the UN Economic Commission for Latin America and the Caribbean (ECLAC) and the UNDP about the activities and potential benefits for St. Maarten. The Governor continued the trip by meeting with the Director of CARICOM Implementing Agency for Crime and Security (IMPACTS) and discussed regional security cooperation.

Governor Holiday, in addition to the governmental meetings, met with the Dean and management of the engineering faculty of UWI and paid a visit to UWI’s Institute for International Relations. At the institute, management of the Diplomatic Academy gave the Governor a tour of the facilities during which he was informed about the work and courses of the Academy.

Governor Holiday also visited the Cocoa Research Institute of UWI. There he was briefed about the reintroduction of agriculture on Trinidad. In a meeting organized with representatives of a financial institution and the Governor they expressed their interest to and shared their ideas about investing and doing business in the region in general and in St. Maarten in particular.

On June 1, during the first evening of his visit, Governor Holiday was the guest of honor at a reception, hosted by the Ambassador of the Kingdom of the Netherlands Jules Bijl, where he met with the Trinidadian public and private sector, the Diplomatic Corps as well as with members of the Dutch Community in Trinidad and Tobago.

In addressing the audience at the reception he highlighted the long standing friendship that exists between the Republic of Trinidad and Tobago, St. Maarten and the Kingdom of the Netherlands. He further stated that “Since becoming a country within the Kingdom in 2010, St. Maarten as part of its strategy to achieve the socio-economic goals of our people has found it important to strengthen ties with our Caribbean neighbors and to participate in regional organizations.”

Emphasizing common historical, cultural and geographic characteristics and shared challenges he went on to state: “I believe that through partnership and cooperation, we stand a better chance to address our collective challenges and hence improve and secure the wellbeing of our people.”