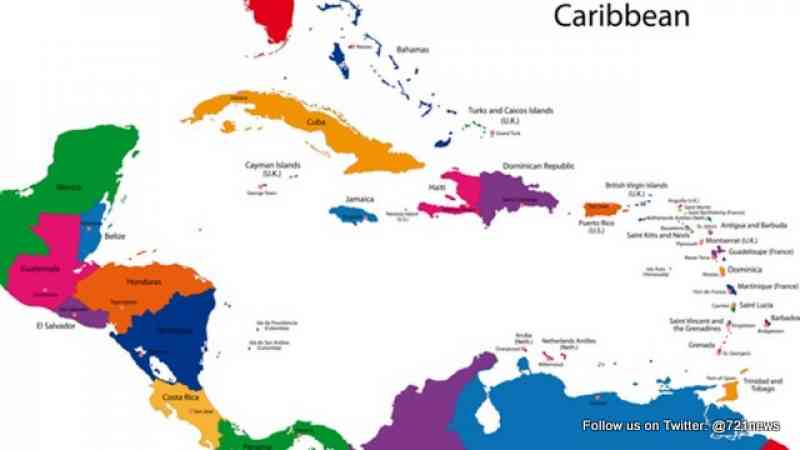 A hub-spoke distribution network is a system of connections arranged like a wheel in which all traffic moves along spokes connected to the hub at the center. Since we are dealing with airlift, we are obviously talking about distribution of passengers. The hub and spoke model relies on perfection. When all is working in harmony and streamlined, then the entire system can be very efficient. Passengers arrive with the larger aircraft on long haul flights at the hub.  They are transferred, and take off again for their end-destinations.

The hub airport should have transit facilities and immigration waiver arrangements. That may already a one problem in the Caribbean, because often these are not available. The hub may care less; they prefer passengers who stay overnight anyway. Understandable. The airlines on their turn may react by not using that particular hub and prefer a different better and more flexible hub. Also understandable. Passengers may not like the hub and spoke system because of the transfer and the extra time it takes. Again, understandable. So, why not just flying point-to-point?

Airlines don’t do favors.  They are shareholder companies that aim to make a profit and subsequently pay dividends to their shareholders. With very few exceptions, they are not publicly owned.  Regardless of its ownership, in order to be profitable, they aim to fill the planes to the brim and operate as efficient as possible. Any territory dreaming of a large airplane of a major airline coming to their “Oh, island in the sun” may be dreaming. The airline perspective is very simple. Fill the plane and fly it to a hub. That airline is off the hook. From there on, passengers for various end-destinations, will transfer to smaller planes of a regional or local air operation that flies them there. That smaller flying machine may also be filled to the rim then, which will fulfill the desire of that smaller airline to be profitable and efficient.

The purpose of the hub-and-spoke system is to save airlines money, regardless whether it is a small or big operation. Aircraft are their most valuable commodity. Every flight has certain set costs (crew, cabin cleaning, ground handling, maintenance, etc.). Each passenger seat represents a portion of the total flight cost. For each seat that is filled, an airline can lower its break-even level. That is the seat price at which an airline stops losing money and begins to make a profit. What in the eyes of a tourism authority is considered an ultimate paradise, from the airline’s viewpoint it may be seen as an undesired destination, since they would have to fly their planes half empty. It doesn’t make revenue dollars and not a lick sense to make deliveries without filling aircraft to capacity.

Courier services use the hub and spoke design worldwide. All packages go through a centralized system with strategically located distribution hubs. It works almost perfect. Packages arrive overnight and or if it absolutely be on-time. Although… Recently I received a comment from the Caribbean executive of one of the major international courier services: “There are pressing issues within the Caribbean aviation sphere – for example the need for infrastructure upgrades, modernization of customs regulations, etc. and other basic and imminent needs.” So, even that segment needs some more attention in the region.

Hubbing may be ideal for packages, however, passengers are no packages, and do not wish to be treated as such. But at least we can learn from the logistics and the punctuality of the system.

One would hope that despite the complexities and inconveniences of hub and spoke airline operations, flying would be more readily available at affordable prices in the Caribbean. The inter-island air traffic in the region has a distinct problem.  Flying from one island to another that is only 1-2 our flying distance away, may take up to 11 hours with 1 or 2 stopovers. The fare may cost US$ 1,000 plus. Ridiculous? No, it may not be the rule, but it is no exception and it is no exaggeration either. Flight schedules and frequencies are part of that problem.

Many small territories try to hold on to what they believe to be their exclusive rights. It’s like wearing an exclusive fancy necktie but suffocating oneself with it.  The governments don’t have much to hold on to anyway, so they try to hold on to whatever they’ve got. It fits in their category of ‘protection’. Therefore, they implement restrictions. Those could be landing rights. Levying passenger taxes is not a restriction, yet, it is an exclusive right and it is a repellent.  Yet, Tourism Ministries and their agencies are virtually screaming and yelling like merchants on a fish market to get airlines to come. And if airlines don’t come, those are perfect scapegoats to put the blame on.

It would be a good idea to work on a “Open Skies” or at least on a “Friendly Skies” concept for the region. Does ‘deregulation’ ring a bell? One word describes best what the biggest hurdle for progress is: ‘clinging’. Without restrictions on route entry, some airlines could be able to enter markets previously closed to them. It could bring more passengers. It could stimulate inter-island activity and commerce. Lowering, or preferably eliminating passenger taxes, can lower airfares and attract more passengers. Mind that every tourist has a vacation budget limit! But what the heck? As a humble column writer without a hidden agenda, nor having a commercial interest, one tries to provide ‘food for thought’. When pointing out that there is an opportunity, it’s seldom acted upon. When there is none, one is often expected to come up with witchcraft.