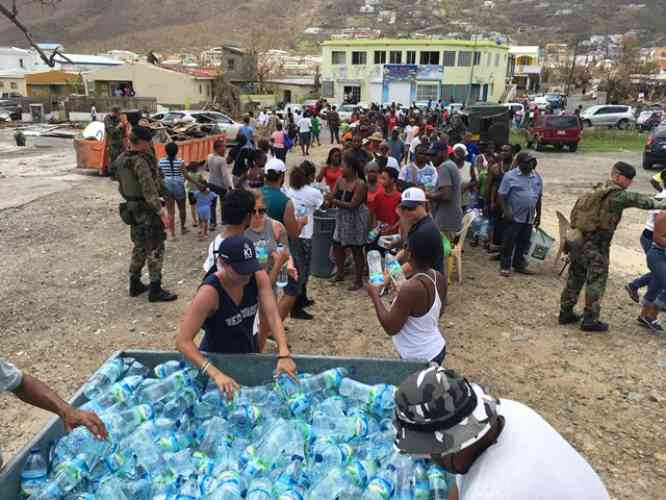 >ST JOHNS, St Maarten — As is known, K1 Britannia Foundation took a leading role in the immediate relief efforts post Hurricanes Irma & Maria, with relief work continuing in the form of material and construction help until June of this year. Having been involved in such an active way post-Irma, the foundation evaluated its role with partners during this time and realized that its job in disaster relief & crisis management is not over but has merely just begun. With key partners such as the cruise lines, the foundation has expanded its disaster relief focus and activities both on St. Maarten and in the region and has made it one of the new pillars of the foundation.

“We as a foundation have always extensively advocated and illustrated the importance of volunteerism in tackling social problems,” says project manager Iris Hakkens. “This importance was highlighted even more so in dealing with the aftermath of the 2017 hurricane season. All that was done was due to individuals putting their own lives at risk and choosing to join forces to help the masses.” With that in mind, and the increased awareness of the importance of preparedness, the foundation contacted people within their volunteer database who had shown interest in disaster relief work and began developing the Disaster Relief & Crisis Team- K1 DIRECT.

“It is not our intention to duplicate efforts, but to fill specific needs that became apparent after Irma,” continued Hakkens. “Over the last several months, we have been meeting with key individuals and entities in this field, including several of St. Maarten’s emergency support functions, local organizations catering to vulnerable people, and international relief organizations whom we have worked with after Irma to assess what is still needed to be better prepared in case of future disasters.” Based on these evaluations and agreements K1 is working closely with ESF7 to identify three main areas in which DIRECT will be committed to play a long-term role on St. Maarten.

Because of the numerous projects the foundation executes through its volunteer program, it has formed relationships with several of the island’s care institutions, such as the White & Yellow Cross, the Foster Homes, the mental health foundation, Safe Haven, etc. Knowing these institutions directly cater to the island’s most vulnerable citizens and had taken in people during and after the storm, K1 visited these organizations to assess their needs immediately after Irma. Then, be it medical attention, food, water, or tarps, K1 acted as best it could to fulfill these needs or alert the proper authorities to ensure that everyone was taken care of.

As K1 DIRECT became a leader in disaster response after Irma, it became apparent the team would continue to play this role of first response and rapid assessments within the first 72 hours post disaster.

Working alongside key partners, K1 DIRECT has been tasked with coordinating several aspects of the inventory, packaging, coordination, and distribution of relief goods allocated to Dutch St. Maarten.

The foundation’s volunteers will also play a key role in emergency shelters for the crucial 72 hours that they are open, assisting with the logistical and management tasks such as registration of individuals and general supervision to ensure that shelter regulations are adhered to, etc.

K1 DIRECT has pre-determined roles with these three tasks and is working with ESF7 to make the necessary preparations. However, due to the unpredictable nature of disasters, K1 DIRECT has met with several of the ESF’s and will partner with them to assist in other ways depending on the need and situation.

“The Coast Guard played a crucial role in all of our disaster relief work post-Irma, and we are looking forward to continuing to work with them for many years to come” stated Priya Thirumur.

To carry out these tasks, K1 identified that it needed to recruit a dedicated team of 20+ volunteers focused on disaster relief, all equipped with the necessary training and tools to effectively execute these tasks. This is how the concept of K1 DIRECT was formed – through a combination of identifying the need and thinking outside the box to effectively solve it. “The advantage that we have as an island having gone through Irma is that we have a very clear idea of what the gaps are, what we need to be prepared for and how to execute a plan. It’s imperative to use this period post Irma to effectively prepare in advance for any future disasters. Not using this experience as a stepping stone for growth as a country and as accountable organizations would be a real shame” vice-president, Priya Thirumur stated.

“Carnival Cruise Line reached out to us to become a long-term partner for disaster relief. Because of its heart for those in the Caribbean region who were affected by the 2017 hurricane season, the cruise line found it imperative to play a meaningful part in not only the recovery but also preparation. We share a common vision with Carnival of the importance of advanced planning and preparedness and are truly touched by the key role it has chosen to play as a founding partner and sponsor in the creation of this program. We believe that St. Maarten and the Caribbean region will appreciate their contribution for many years to come due to the benefits of K1 DIRECT’s relief activities.”

Based on these primary areas of focus– first response, distribution coordination, and shelter management– DIRECT members have started and will continue to undergo trainings. “There are a variety of skills needed to execute these tasks. Shelter management for instance entails not only knowing how to properly register individuals, but also being able to manage people in distress. How do you handle the situation if someone in the shelter has a panic attack? How do you handle an electrical fire? Holland America Line has adopted the search and rescue and shelter management aspects of K1 DIRECT, enabling us to train volunteers and secure the necessary equipment for these aspects,” says project manager, Alan Schet. Trainings, such as CPR, AED usage, First Aid, Basic Fire Safety, and EMR have already been completed or are currently underway. Volunteers will also undergo training in search and rescue, psychological first aid, and various humanitarian courses regionally and internationally.

“The goal is to establish a team of 20+ core members who will go through basic training in all fields,” added Schet. “Based on individual interests, skills and leadership potential, a few will be selected to advance in specific fields. For instance, all core members will be trained in CPR/AED/ First Aid, eight persons will do the EMR course, and four will advance to EMT.” The purpose of this is that should the group be split into units, each team will have a member who is advanced in a different field and is able to take the lead when this expertise is needed.

K1 is currently also developing a branch of DIRECT in Curacao. “Our volunteers residing on St. Maarten are willing and passionate about their role in assisting in managing crises, but we cannot predict that they or those close to them will not be affected should the island be struck by a disaster.” For this reason, K1 DIRECT will train volunteers on other islands within the Dutch Kingdom that can be mobilized. As the probability of a hurricane affecting Curacao is smaller, K1 decided to base its second team there. Winair has been a key partner in this effort, committing to assist as much as possible with flights for volunteers immediately before an impending disaster. “Because one of the core ethics of K1 DIRECT is providing dependable assistance and to continue to be an organization that government and the island can depend on to execute specific tasks, we had to consider the possibility that our volunteers here could be affected by a disaster and that we needed to create a contingency plan. Thus came the idea to form an additional team – having the same qualifications and expertise as the team in St Maarten – on another island that will be brought in when necessary. This could also be helpful if the need becomes more than our core team here can manage”, the foundation’s vice-president Priya Thirumur added.

As K1 assisted in Dominica after Hurricane Maria, they decided that providing help within the region needed to be a key element of K1 DIRECT. K1 has met with the Disaster Management of Dominica and the British Virgin Islands, to discuss how they can be a part of their disaster relief structural planning. For all its relief activities in the region, K1 Direct will be partnering with Rapid Response Team from Switzerland, having now become their official partner for disaster relief in the Caribbean Region. The plan is to fly into these countries immediately before an impending hurricane to be on-ground to provide assistance during and immediately after a disaster. “These islands, just like St. Maarten, are vulnerable after the 2017 hurricane season,” explained Thirumur. “In times of crisis, we need to pool together resources and focus on how we can help one another.” DIRECT aims to expand its partnerships with more countries in the region in the coming years with the help of sponsors.

To learn more about K1 DIRECT and how you can be a part or assist, contact the K1 Britannia Foundation via their FaceBook page, or their website at www.k1britanniafoundation.org