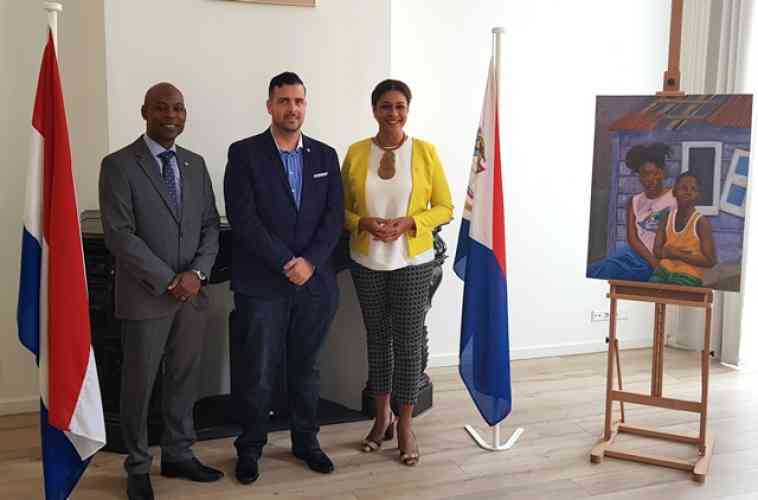 >Den Haag/Philipsburg –Minister of Tourism, Economic Affairs, Traffic & Telecommunication the Honourable Stuart Johnson discussed a number of topics such as the US-Preclearance and incentives for large and small businesses during his visit to the St. Maarten House in The Netherlands this week.

“I felt it imperative to meet with Minister Wuite and Deputy Minister Somersall to discuss a number of concerns and also to find ways in which the Ministry of TEATT could be further supported in The Netherlands by the Honourable Minister Plenipotentiary Jorien Wuite and her Deputy Minister Michael Somersall and members of their cabinet,” Minister Johnson said.

Minister Johnson also took the opportunity to present Minister Plenipotentiary Wuite and Deputy Minister Somersall with the priorities of the TEATT Ministry highlighted out of the governing program.

While in The Netherlands, Minister Johnson will be making a special presentation to various stakeholders and media outlets. He said, “It’s time we get St. Maarten back on track, and I remain fully committed to ensuring our country regains its maximum potential.” He will use the opportunity to promote St. Maarten’s 50th Anniversary of Carnival which will be celebrated in 2019 and will be looking at securing additional airlifts from KLM for that period and for the St. Maarten Heineken Regatta, from The Netherlands to St. Maarten.

Johnson gave a progress report on developments in St. Maarten and highlighted areas in which he envisages close collaboration with the St. Maarten House would be instrumental in ensuring some projects are finalised.

Minister Johnson outlined the general scope of the plans for the Princess Juliana International Airport (PJIA) and explained that the formalising of US Pre-Clearance will require the approval of the legislative branch on St. Maarten and that of the Dutch Government as well.

The Air Service Development Agreement and the work being done in conjunction with PJIAE on an incentive program geared at returning direct service to St. Maarten.

Government incentives for large and small properties as a means of improving the speed of their recovery and the work being done to determine the profile of the Dutch Visitor while at the same time attracting niche segments of the International visitor market were also discussed.

The St.Maarten Tourism Bureau (STB) and the St.Maarten House have also committed to closer ties and further strengthening of its working relationship.

“The St.Maarten House plays an important role in showcasing our country in the Kingdom. Promotional materials and the overall visibility reflective of our island needs to be found there and through STB this will be immediately improved on,” Minister Johnson said.

During his visit to The Netherlands Minister Johnson also met with Mr Carlvin Brooks, Chairman of the Board of the Unleashed Potential Group, (UPG) who is a financial lawyer by profession. Brooks gave some insights on the developments within the foundation and its goals.

The UPG has as its primary objective the revitalisation of St. Maarten’s economy and the improvement of the social welfare of its citizens as well as promoting the return of young St. Maarten professionals to the island after studying and gaining professional experience abroad.

The Minister encouraged Brooks to also look at opportunities in St. Maarten that currently require his expertise. Minister Johnson Commended Brooks on his service as a member of the foundation and as a role model for St. Maarten students in Holland.