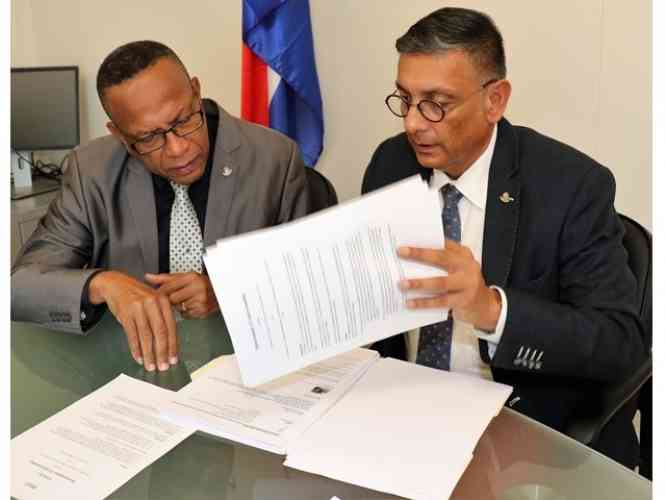 >PHILIPSBURG—Minister of Education, Culture, Youth & Sport (ECYS) Wycliffe Smith will now be able to enter a Memorandum of Understanding with the University of Curacao for the commencement of Law classes at the University of St. Martin, now that Finance Minister Perry Geerlings has signed the National Ordinance to guarantee its funding.

The National Ordinance was signed during a brief ceremony at the office of Finance Minister Geerling’s at the Government Administration Building on Soualiga Road #1 on Friday. Minister Smith said the signing of the document would reassure those waiting to attend the law classes that the course will soon begin.

Minister Geerlings had indicated during a sitting of Parliament last week that the Naf.1 million was already in place for the law course. He explained that the National Ordinance was the final piece of the process that was being awaited. Once it was signed by his Excellency the Governor Eugene Holiday, Minister Geerlings was able to co-sign the document to facilitate the release of the funds.

The USM, the University of Curacao and Minister Smith had planned for the law course to start in September. Now that the National Ordinance has been signed, the Minister of Education is able to finalise the details of the agreement with the University of Curacao for the immediate commencement of the law classes on St. Maarten. The classes will be streamed live from Curacao to students in St. Maarten and some classes will be pre-recorded and sent to students here as well. In some cases, the professors will travel to St. Maarten to attend classes in person and work with local students when they have specific assignments.

The law program will last four to five years at the cost of USD$3000 per year for each student.

The commencement of this Law program through the University of St. Martin meets a target under the Governing Program 2018-2022 in which USM becomes the nucleus for national and international development.