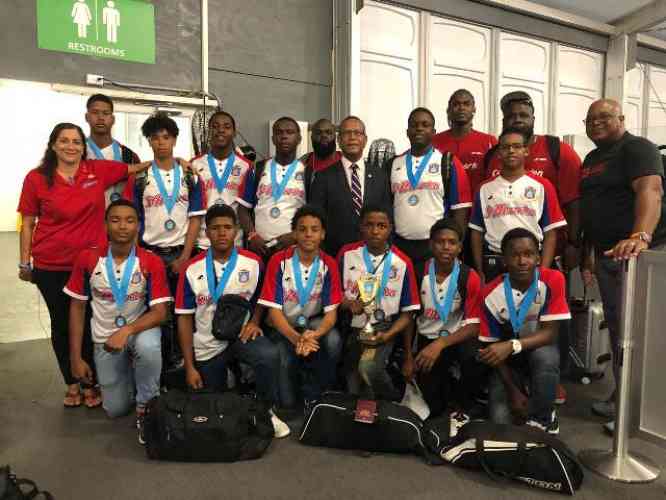 >PHILIPSBURG, Sint Maarten — The St. Maarten 16 and under Baseball Team returned home as Champions from the Royal Kingdom Games in Aruba to an honorary welcome by the Minister of Education, Culture, Youth, and Sport, the Honourable Wycliffe Smith on Saturday afternoon. As the coaches, management and players exited the Conviasa aircraft, Minister Smith congratulated each person on a job well done.

The team won their first three games against the Netherlands, Bonaire, and Curacao, before rainy conditions caused the final game against Aruba to be cancelled.

In the annual tournament hosted by the Ministry of Justice of the Netherlands, Sint Maarten scored 15-0 against the Netherlands, 14-0 against Bonaire, and 3-1 against Curacao. When the final game against host, Aruba, was cancelled due to the field becoming too wet for play, the organisers for the games assessed Sint Maarten as the team with the leading scores, most disciplined and over-all top performance.

As a result, the Sint Maarten Baseball Team was awarded the 2018 trophy for the Kingdom Games.

According to Minister Smith, “We are proud of our athletes and how well this team represented Sint Maarten in Aruba. Our youth are exceptional, and with the right support, there is no limit on what they can accomplish. We must encourage them, their coaches and the organisations that are dedicated to improving sports on our island because Sports matter.”

The Sint Maarten Baseball Academy engages youth from the different elementary and high schools, regardless of their experience with the sport. The Academy aims to train and develop the recruits into top players who are capable of representing Sint Maarten on the regional and international level. Another recruitment drive will be conducted shortly.