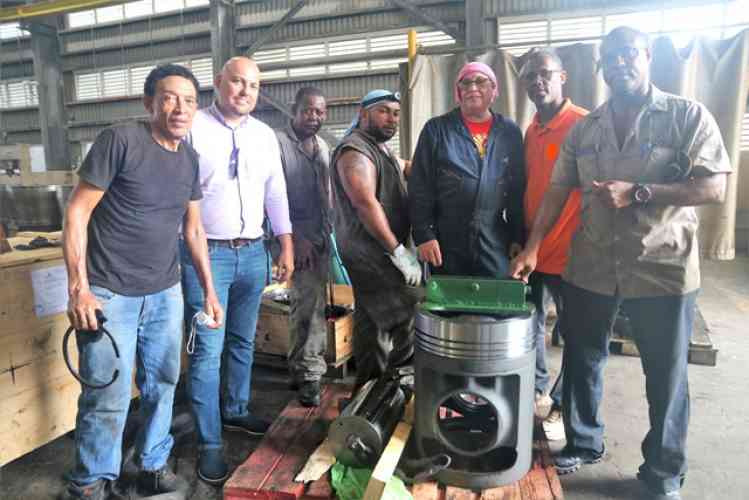 CAPE BAY, Sint Maarten — Less than 24-hours after being sworn in as the new Minister of VROMI, Christopher Wever hit the ground running, visiting the Power Plant for utility company NV GEBE on Saturday morning, to get updates on the power supply woes GEBE experienced three days prior.

GEBE’s Chief Executive Officer Kenrick Chittick met Minister Wever at the power plant and gave him a full overview of the efforts of his team, some of whom had been working through the day and night on Friday and returned early Saturday to complete the task of restoring the damaged engine.

Wever said, “Our residents and businesses depend exclusively on GEBE for their water and electricity supply. As the Shareholder Representative, I will work with GEBE to ensure that they have the necessary resources to get the job done.” He said it is essential that the service is provided to the “satisfaction of our people.”

The Minister said on Sunday following the visit to the Power Plant “while mechanical equipment will often malfunction, it is incumbent on GEBE to keep the public abreast of the situation and do its utmost to restore power swiftly.”

Chittick told the Minister on Saturday that a piston liner failure on one of the engines resulted in an automatic shutdown. Following this occurrance, GEBE had to manage its reduced energy supply level by resorting to load shedding in certain areas.

Much like a car, the generator engines that supply electrical power to the island use pistons with piston rings for compression. The failsafe for these engines worked effectively shutting down the system to prevent further damage after the Piston Liner failure was detected.

Once the engineers removed the damaged Piston and piston rings, the next challenge was to source replacement parts.

Chittick told Minister Wever that xcellent cooperation between GEBE and the St. Lucia Electricity Services Limited (LUCELEC), and WEB Aruba resulted in the swift arrival of the Piston and Piston Rings.

The engineers were busy unpacking the new parts on Saturday when Minister Wever and his delegation arrived at the scene.

Minister Wever thanked the men for their dedication to service for the people of St. Maarten and said that they were examples of what defines St. Maarten. He said, “We have always been a people who show our true strength of character when it is crunch time, without fail.”

Minister Wever wanted to find out if there was any truth to the allegation that GEBE was unfairly selective in deciding who gets left without electricity when they have to do load-shedding. He said many people from within the community were concerned that their areas were being left without power for extended periods while others never experienced outages during load-shedding.

Chittick explained that the new system installed by GEBE four years ago ensures that the controllers can see on the hour where there is a drop in power or a spike.

The system helps the Control Room Operators to properly manage the load to ensure that it is evenly distributed. The challenge at times is that some areas such as dense industrial locations and areas where large businesses operate need more energy at a certain point during the day tha

However, once the new Piston is installed, the engine will go back online, adding even more power to the grid.