Home 721news PM Romeo Marlin pays a courtesy visit to the Kingdom of the Netherlands... 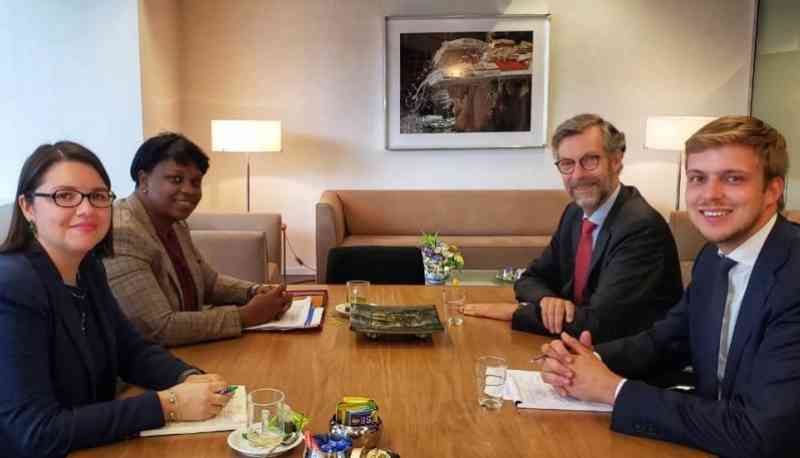 BRUSSELS, BELGIUM – On Monday September 2nd, at the start of her working visit to Brussels, the Honorable Prime Minister, Leona Romeo-Marlin, paid a courtesy visit to the Kingdom of the Netherlands Ambassador to the European Union, Mr. Robert de Groot. During their meeting, the Prime Minister gave the Ambassador an update on the reconstruction progress, whereby she highlighted that her aim was to build Sint Maarten back more sustainable.

One of the main topics discussed during the Prime Minister’s visit was the French-Dutch cooperation project, specifically, the construction of a joint wastewater treatment plant. Ambassador de Groot stated that all eyes were on Sint Maarten and Saint Martin to accomplish this project, as it would be the first of its kind, blending various EU financial sources. The Prime Minister reiterated her desire to cooperate together with the French authorities to build this joint plant.  In fact, she emphasized that one of the main objectives of her visit to Brussels was to secure the necessary funding for the successful construction of the plant in partnership with the French side.

Moreover, the Prime Minister and Ambassador touched upon the ongoing Brexit negotiations. Though at the moment the ultimate outcome is still uncertain, the necessary discussions are taking place both within the Overseas Countries and Territories Association (OCTA) and the European Commission to ensure that the transition goes as smoothly as possible for the Overseas Countries and Territories (OCT). In the event of Brexit, the number of OCTs, and as a result, their collective voice within the EU will strongly decline once the twelve British OCTs leave.

Hence, to ensure Sint Maarten’s voice remains heard within the European political arena, Prime Minister Romeo-Marlin stressed the importance of establishing bilateral relations with European Parliamentarians and will be meeting with a number of Dutch EU Parliamentarians on Tuesday.