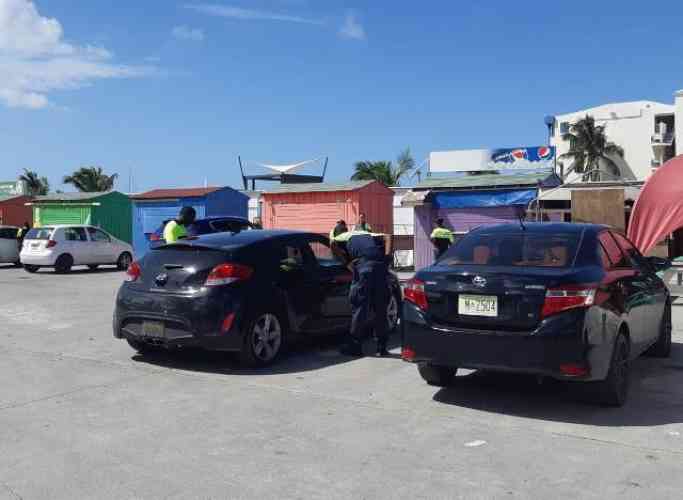 The Special Unit Robbery  (S.U.R)  arrested two suspects on Thursday afternoon for their involvement in a robbery of a supermarket  in Cole-Bay, that took place on October 4th 2019.  On the evening of  October 4th 2019 , two young men dressed  in all black with hoodies on, came into the restaurant brandishing a firearm and robbed the cashier. The suspects with the initials  J.S.F  and O.D.G  where picked up on their jobs yesterday afternoon by the detectives .  They are being held in custody for further questioning. This investigation is still ongoing .

The dispatch center directed the police patrol  on Thursday evening  November 21sth 2019,  approximately  08.30, pm to a restaurant on the Nisbeth road for a man who was selling narcotic in the area.  At the location the police encountered a dispute going on between some people close to the restaurant. The police later became aware that one of the men was busy dealing narcotics.  During the control that was done on the suspect with the initials K.A.S.J, large amount of marijuana was encountered in his possession. He was immediately arrested by the patrol and brought over to the police station where he is being held for questioning.

Minor  struck by car while crossing the street .

The traffic department and police patrol were dispatched to the

Union road   on Thursday afternoon  at about 05.20 pm for a traffic accident where an 8 years was struck by a car.  According to the information gathered, the minor was crossing the road at the same time a red jeep was driving by. The victim was struck on his side, but suffers only minor injuries to his  hands and feet . He was treated on the scene and later transported to the St.Maarten Medical Center.  Later in the evening he was released from the medical center and sent home. The Traffic department is busy investigating this accident.

The Police force KPMS is now in the process of upgrading and further developing its personnel on St. Maarten.  In this climate the police are training three rookie classes on island  with the vision of giving  better service to the community .

For practical part of their module, the BPO3 class held a traffic control on the parking lot of kimsha on the Welfare road on Friday morning. During this control that’s was done under the supervision of the school coaches, 23 cars was stopped and 6 fines were given.  The drivers were fined not having their driving license or insurance with them and also for driving without seatbelt on. There was 10 cars stop and control because of driving with tint on their vehicle.   These types of traffic controls will be held more frequently in near the future. The police force is asking the drivers to have all their documents for the vehicle with them when driving on public roads and remember to adhere to the traffic rules.