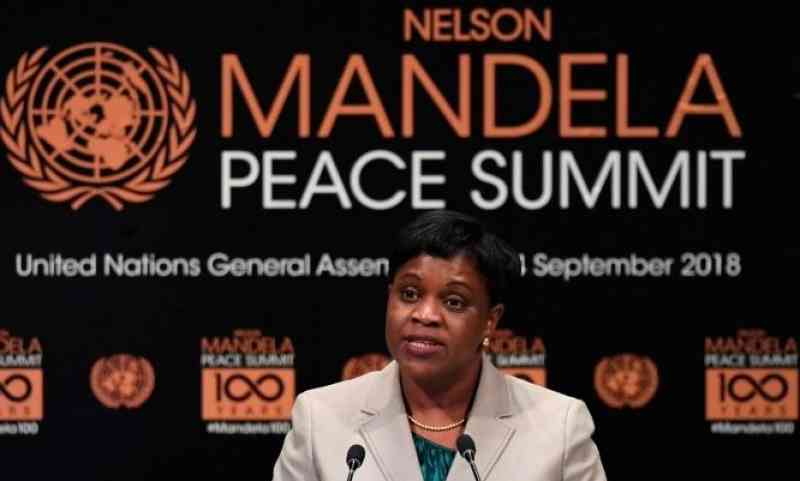 >NEW YORK – While on a working visit to the UN General Assembly in New York, Prime Minister Leona Romeo Marlin had the opportunity to give an address at the Nelson Mandela Peace Summit.

“Today, I am truly grateful on this occasion to participate in this Peace Summit devoted to one of the most prominent revolutionary figures of our time, Nelson Mandela,”

Dedicating the 2019-2028 period to Nelson Mandela, as affirmed in the political declaration [to be] adopted today, has great symbolic and inspirational value. Let me seize this opportunity to thank South Africa and Ireland for their valuable efforts in co-facilitating the drafting process.

Today’s global challenges and threats remind us that the world Madiba hoped for, the world also envisioned in the UN Charter, is still far from being a reality”, said Prime Minister Romeo Marlin.

Strengthening International Maritime Cooperation in the Caribbean was the subject of another side event attended by Prime Minister Romeo Marlin, Prime Minister Wever-Croes and Minister of Defense of the Kingdom of the Netherlands Ank Bijleveld. During the meeting discussions centered around issues of enhanced cooperation between the various countries and institutions within the Caribbean region in the field of fighting transnational organized crime (such as illicit trafficking of narcotics, weaponry and other contrabands, smuggling of migrants and human trafficking) making better use of the legal instruments in place and promoting citizen security. In addition to this, the Kingdom of the Netherlands and Costa Rica made efforts to reach out to countries concerned in order to promote, improve and possibly expand the Caribbean Regional Maritime Agreement of the San Jose Treaty. A follow-up meeting with CARICOM countries will be planned in the near future as they have showed willingness to engage in maritime cooperation.

“Attending such high level meetings at the United Nations helps to position Sint Maarten in its quest to re-establish itself as the beacon of the Caribbean following the passing of Hurricane Irma and Maria. As Prime Minister I recognize and promote the importance of international relations and networking at the highest levels with world leaders which can benefit the overall development of our country” said Prime Minister Romeo Marlin.

Before returning to Sint Maarten, talks were also held with one of our neighboring countries St. Kitts and Nevis represented by current Prime Minister Timothy Harris. On behalf of the Government and people of Sint Maarten, Prime Minister Romeo Marlin expressed congratulatory greetings on St. Kitts and Nevis achieving its 35th Anniversary of Independence on September 19th 2018.  The discussions with Prime Minister Harris touched on maritime regulations, combating crime on both islands and encouraging the return of consumer tourists from the twin island country via our harbor and airport.