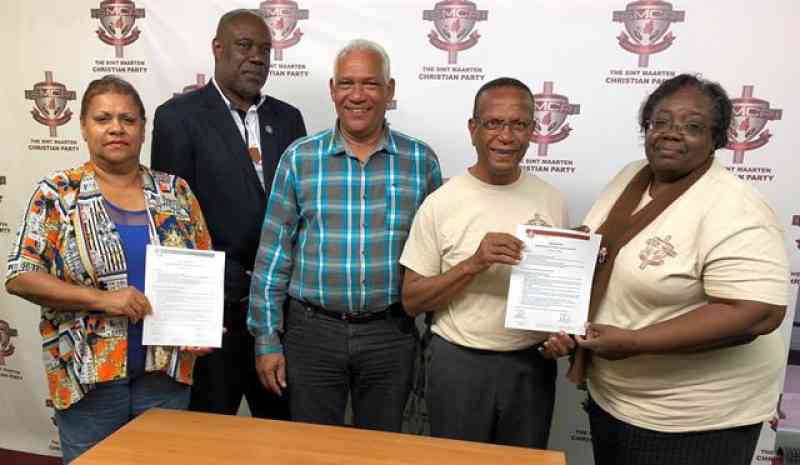 On Saturday, February 3rd 2018, the Board of the Sint Maarten Christian Party signed a declaration stating that the Party’s MPs will begin the process towards eradicating of poverty on Sint Maarten when elected to Parliament. Witnessing the signing ceremony were members of the Sint Maarten Anti-Poverty Platform (SMAPP) Raymond Jessurun and Claire Eshot and Alberto Bute.

I am sure that there will be people who will immediately label the signing of this document as another political gimmick leading up to the February 26 elections. However, we want to assure the people of Sint Maarten that signing the declaration is not a political stunt but a serious attempt by SMCP to begin the process to eradicate poverty in Sint Maarten.

SMCP is of the opinion that something must be done for the many persons who are living below the poverty line. The process, for example, could start with parliament reviewing the laws to increase the social allowances and the old age pension. SMCP also believes that the minimum wage should be converted into a living wage and that laws need to be put in place to create incentives in order to stimulate the economy. There is still a lot of work to be done in order to improve the standard of living in Sint Maarten. By signing this declaration, SMCP has affirmed its willingness and commitment to initiate this process, in collaboration with the Sint Maarten Anti-Poverty Platform (SMAPP) which is in direct contact with the persons who are feeling the pinch of poverty, such as our pensioners, the unemployed, persons receiving social assistance, etc. It makes no sense re-inventing the wheel when the SMAPP has already done a lot of groundwork including proposing several strategies that deal with the eradication of poverty.

Poverty in Sint Maarten is real and especially now after hurricane Irma, the facts and figures of people living in poverty in Sint Maarten are glaringly visible for all to see. More people are reaching out to government for social assistance. More people are in need of jobs. Our pensioners cannot make ends meet on their meager pensions. Mothers and fathers have to work two and more jobs because the minimum wage is too low while the cost of living is very high. These conditions existed before Irma but this hurricane brought us face to face with the abject poverty in which 75% of our people are living. SMCP empathizes with the hurt and suffering of our people and intends to do something about it when elected to Parliament.

In light of the integrity investigations that took place in 2014/2014, Transparency International published a report entitled “Sint Maarten 2015 National Integrity System Assessment” in which they concluded on page 22 “that more than 75 per cent of the St. Maarten households live under the poverty line”. The report went on to mention that Sint Maarten has a relatively high income per capita but the income is unevenly distributed and that 22% of the population is without income. The report continues that the census survey of 2011 shows that 75 per cent of all households earn less than ANG4,000 or US$2,222 in gross income per month and that 67.5 per cent have less than ANG3,000 or US$1,667. This report was submitted to parliament but our parliamentarians have never taken the time to discuss it. In March 2017 the Sint Maarten Anti-Poverty Platform presented this data once again to Parliament but to date our august legislative body has done nothing with the information.

SMCP is very well aware of the fact that the eradication of poverty cannot be accomplished in a four year parliamentary term. However, in order to get the ball rolling SMCP has taken the bold step, which no other political party has done yet, which is to discuss the proposal submitted by the SMAPP and to adapt and sign a declaration committing to start the process when elected to parliament. The signed Declaration is available on our Facebook page www.facebook.com/smcp.online.