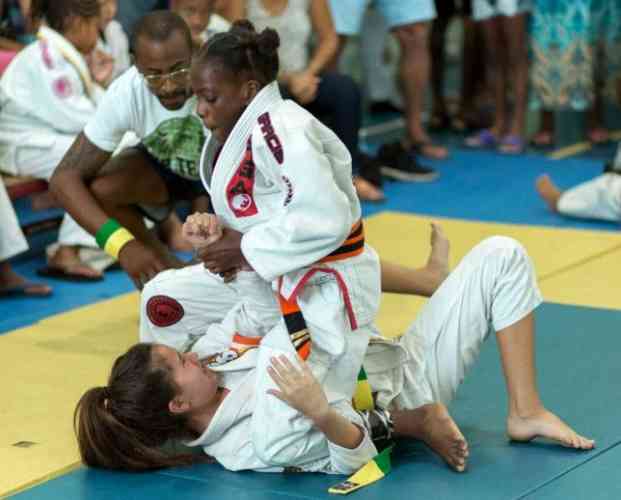 Results from the Brazilian Jiu Jitsu matches were as follows:

Sacha Leal competed in both Jiu Jitsu and Muay Thai and agreed to the match to give his teammate whose adult opponent from Guadeloupe couldn’t make it. Shaquannie Vanterpool also defeated 14 year old Ajae Dayday who stepped up to a big challenge for a match with the heavier and older teammate who trains exclusively with adults.

Antoine Marquet of Guadalupe defeated Cristiano Cigodari via points. In a close match Guadaloupe’s only female competitor, 17-year-old white belt Eloa Felix defeated SXM’s 14 year old Renard Brison by points. The match was scored incorrectly, and the win first given to Renard was overturned by referee Melissa Bardfield after consulting with Charles Bucher of Guadeloupe. Miss Eloa Felix is a strong young female competitor whom we expect to see great things from in the future.

At the end of the day the crowd was treated to a black belt match- the first ever of this level in St Maarten- Guadeloupe’s head professor, 41-year-old feather weight Charles Bucher had a friendly match with St Barth’s younger and heavier blackbelt Chris Vlang. The close match was decided by points at the very end of the match with the win going to St Barths.

The results of the Muay Thai kickboxing matches were as follows:

Joshua Page had a tough fight with Vadim Malisev, Vadim won via points. Louka Williams went up against Jayden Busby, Jayden got the win via points. Gabriel Sequaris went against Joshua Page with Page coming away with the win, Sacha Bourguignon went against SMMAF tournament veteran Avish Dilen, Sacha fought a good fight and edged Avish to earn the win via judges decision.

Sacha Leal fought hard against Kimberly Reymond but lost via points to Kimberly.  Anne-Marie James had an exciting match against Thaliya Barray, fighting smart Anne-Marie got the win. Stephen Illis showed his strength to get the win against Helwan Mande. in our last fight of the day Trinity Romney went up against Sacha Bourguignon after going toe to toe the fight was deemed a draw.

The SMMAF board of directors would like to thank the Milton Peters School for their use of their gymnasium, and all volunteers and sponsors that made the event a great success.  For information, sponsorship for future events please contact info@sxmbjj.com.