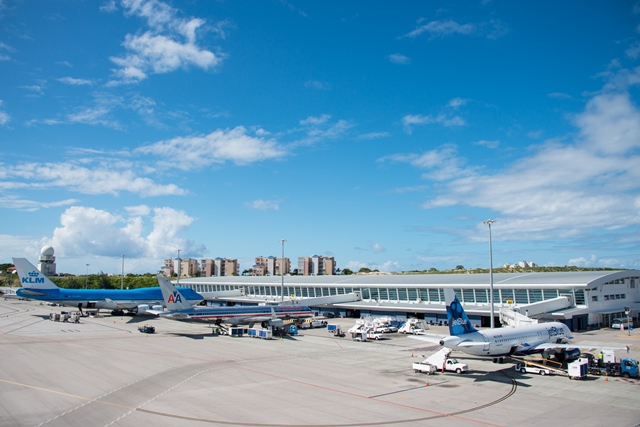 Simpson Bay, St. Maarten –The Princess Juliana International Airport, (SXM Airport) suffered damages of up to US$100 million as a result of the destruction caused primarily by Hurricane Irma and Hurricane Maria, according to initial estimates revealed by Michel Hyman, acting CEO and COO of the airport.

“Our main concern was the safety of our employees, all of whom have been accounted for after the storms. We however mourn the death of Renaldo Benjamin, aka “Bambi” who worked as an independent contractor at the airport. Our heartfelt condolences to his family and all the loved ones he left behind. May his soul Rest In Peace,” Hyman said.

“Several of our staff suffered material damages and we very much appreciate the fact that in spite of the personal difficulties they are going through, they have continued to work diligently to ensure that we resume commercial operations within the shortest possible time,” Hyman stated, adding that SXM airport should be able to start receiving commercial flights within short.

Hurricane Irma was a mega storm that inflicted severe damages to the whole island and to our hub partners, Anguilla, Tortola and St. Barths, however together we will bounce back and regain our enviable position as the leader in Caribbean aviation and the award winning, world famous airport we were before the storms,” Hyman said.

“As a matter of fact,” he said, “KLM has already announced that it will start flying twice weekly to St. Maarten from Amsterdam with effect from October 29th with a stopover in Curaçao.

“Similarly, Winair has indicated that if granted the necessary green light by the relevant authorities, it would introduce limited scheduled service to Saba, St. Eustatius, St. Barth, Antigua, and St. Kitts as of October 1st.”

“All these are very encouraging developments that point to the fact that everyone is eager to return to normal service to the traveling public.”

According to Hyman, both the airside and the landside of the airport suffered damages. However, the runway has been cleared to allow for humanitarian and emergency flights, including the evacuation of thousands of people, many of them tourists, in the aftermath of Hurricane Irma.

In spite of winds of up to 230 mph recorded at the airport during Hurricane Irma, all four jet bridges were severely damaged.

“There were extensive roof and water damage to the interior of the airport due to this. As a result, there was significant damage to equipment, but thankfully no structural damage has thus far been identified, Hyman said.

He disclosed that the entire perimeter fencing has been destroyed. The restoration of the fence is critical because no commercial aircraft would land without the fencing up.

There were minimal damages to the fuel farm and the Air Traffic Control suffered severe water damage. The Fire station however was totally destroyed, Hyman said.

“SXM Airport has full insurance coverage, including business interruption. All our structures and assets are fully insured. Based on our policy, our employees have nothing to fear about their jobs or their wages,” Hyman stated, adding that the airport has retained the renowned Willis Towers Watson as its claims advocate.

“Neither do our creditors have anything to fear because we have enough liquidity to service our debts for the next 18 months,” he added.

According to him, the airport is in the control of the Dutch military at the moment to guarantee safety and security.

“We will move temporarily to the current FBO building from where we will process arriving passengers and use our baggage sortation area for processing of departing passengers once commercial flights resume. We expect about five flights daily when this happens. However, the airport already receives daily cargo deliveries via Amerijet and the Dutch, French and U.S. military, bringing in much needed relief materials,” Hyman said.

“I want to thank the airlines and all other stakeholders that use our airport for their commitment and continued support during these difficult times. I am convinced that together we will be back stronger and better, ready to offer passengers an experience that will move them to keep coming back.”