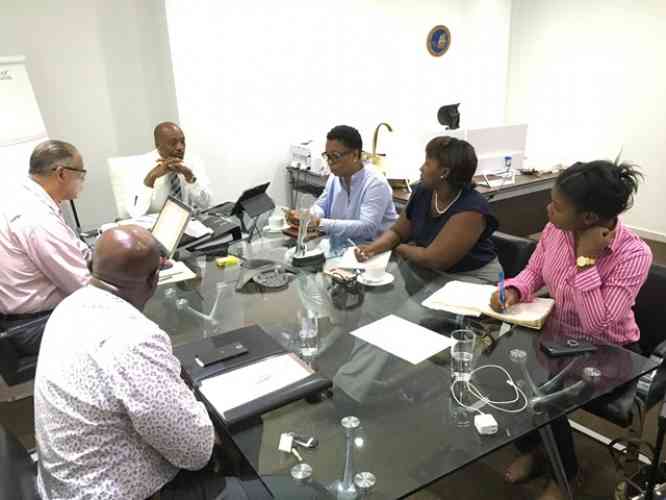 SIMPSON BAY, St. Maarten – The Management Team of the Princess Juliana International Airport (SXM) kicked off a series of meetings it will be holding with the hub partners during the first quarter of the new year with an extensive exchange of information with the Anguillan authorities.

“The importance of meeting with the hub partners cannot be over-emphasized,” said Michel Hyman, COO and Acting CEO of SXM Airport. “It is quite essential for the continued working relationship between the Princes Juliana International Airport and all its hub partners,” adding that “partnership” depends on timely and effective communication.

And according to Donna Banks, Chairperson of the Anguilla Tourist Board, who led the Anguilla delegation, “The longterm goals of a budding relationship was the core premise of the discussions.”

Hyman said the Anguillan authorities were briefed on the overall extent of the damages suffered by SXM Airport, including the Air Traffic Service (ATS) in the aftermath of Hurricanes Irma and Maria and given updates on the reconstruction of the terminal building which has been rendered out of service since Irma struck the island.

The Anguillan delegation also received updates on the current operations and transit procedures at SXM as well as about the ongoing construction of the new tents to better serve the travelers.

“The Anguilla-bound transfer passengers are of great importance to SXM Airport and we are trying to fine-tune different avenues to avoid bottle-necks,” Hyman added.

Other topics discussed included the ongoing negotiations for the establishment of US Pre-Clearance at SXM and how this would affect the Anguilla-based passengers.

Donna Banks recalled the days when the hub partners came together to jointly seek new airline services and expressed the wish to see this happen once again.

Hyman responded by stressing that it was the intention to reconvene the Air Service Development Committee (ASDC) meetings as soon as possible which would facilitate the joint quest for new airlines.

SXM Airport is set to continue these meetings with all the hub partners – St. Martin (French), St. Eustatius, Saba, Nevis, St. Kitts and Dominica in the coming weeks and months.