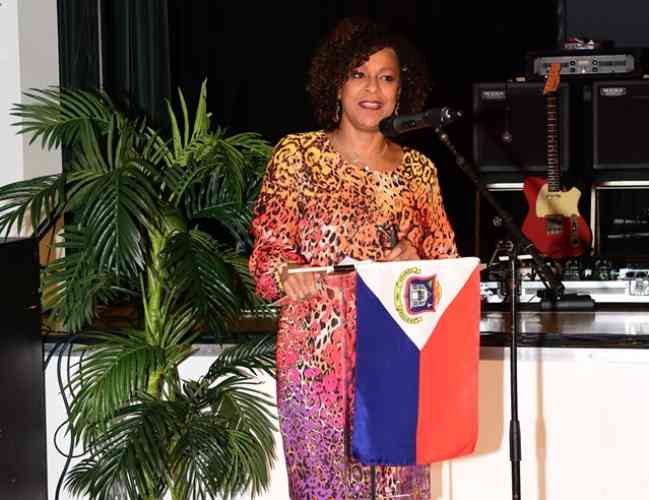 THE NETHERLANDS (DCOMM) – After four months of preparations and communication with participants, the Cabinet of the Minister Plenipotentiary commemorated the 60th anniversary of Sint Maarten’s Day with two separate events.

This year’s celebrations were mirrored to that of Sint Maarten in regard to the theme and contents.

On November 8th entrepreneurs, up and coming artist and professionals were showcased. Attention was given to the history and traditions of Sint Maarten, where the former Minister Plenipotentiary, Mathias Voges hosted the breakout session themed “back in the days”. Voges presented interesting historical facts and shared some of the island’s customs.

John Sandiford was the host for the entrepreneur’s breakout session, where local entrepreneurs of Sint Maarten descent were given the opportunity to relay to the large audience present, their road to doing business in the Netherlands.

Some of the entrepreneurs participating in this session included, M. Beauperthuy, Duarte Smith, Jerome York and Nazeth Smith.

Clifford Brown and Manukiel Edward, two Sint Maarten students studying dance in the Netherlands, presented the futuristic version of the ponum dance where the key elements were presented.

In this year’s setup, Sint Maarten culinary artists were afforded the opportunity to sell local dishes to the patrons in attendance. The dishes presented were the famous Johnny cake and chicken-leg, various local soups, rice and peas, coconut tarts and much more delicious delights. Guavaberry from Sint Maarten, Sint Maarten apparel and souvenirs were also for sale during the celebratory event.

At the official reception where various Ambassadors, representatives of the Government of the Netherlands, international organizations and Non-Governmental Organization’ (NGOs) along with a vast turn out of persons from the Sint Maarten diaspora in the Netherlands consisting of students young professionals and seniors alike, were witness to a well- rounded array of performances.

The evening program began with musical interludes by the Lady of Jazz herself Anastacia Larmonie accompanied by acoustic guitarist, Luis Larmonie, to the delight of all present. The traditional to the eclectic presentations of Sint Maarten music set the tone for what was to come.

Starting off the evening event, was daughter of the soil and professional songstress, Rachell Brown with her rendition of the Sint Maarten song which was to everyone’s delight a most memorable experience.

Reverend dr. Joan Del Sol Mead, of the Netherlands circuit of the Methodist Church did the prayers. Speakers for the evening were the director of the Cabinet of the Minister Plenipotentiary, Carol Voges, whom in her welcome address, highlighted the theme of ‘We Story,’ and its connection to the path Sint Maarten is on, with the clear message that through unity and mutual respect Sint Maarten will move forward.

There was also a spoken-word segment where Lysanne Charles and Edwina Hodge recited works they created specifically for the occasion.

One of Sint Maarten cultural icons here in the Netherlands, Violet Lake together with her group Gwendis, performed their skit representing the local market vendors of ‘back in the days.’

The Minister Plenipotentiary in her address eluded to the historical relevance of keeping both the tangible and intangible culture of Sint Maarten alive.

As the country transitions and moves forward, this is of major importance, the Minister said. Notwithstanding the many hiccups experienced over the past nine years, Sint Maarten as a young country was allowed its mistakes, but that in moving forward as a nation, we will get it right in the benefit of its people. She further emphasized the significance of embracing unity between the North and South of the island. Her main message being, “One island, one people, one destiny”.

The Deputy Minister Plenipotentiary, Michael Somersall, after giving the words of thanks, recited his rendition of a poem inspired by Maya Angelou in which his message to Sint Maarten was, WE WILL RISE. The MC for the evening was Kelly Busby.

The official reception was followed by a mini concert by a few Sint Maarten-very own Musical Ambassadors in the Netherlands, namely, Orange Grove who had the crowd on their feet and Kyle Brown, also known as DJ Spy, with his repertoire of artists from way back in the days to the present.

On the 10th of November, the Cabinet of the Minister Plenipotentiary held the first around the island relay race NL edition in the Zuiderpark, The Hague.

The intention of this new initiative is to engage students in sports and health related activities next to their academic studies and is set to be organized annually by the Cabinet of the Minister Plenipotentiary.

The organization of this event was led by a sports committee consisting of Alaine van De’Listle, Jamil Richardson and Kevin Javois, under the leadership of Minister Wuite.

The committee received assistance from Trisport, the top sport division of the municipality of The Hague, as well as USC and UPG.

In total seven teams registered, each team consisting of 11 runners. Teams participating came from the private and public sectors. Two universities registered and were among the top teams together with a team of the Kingdom Relations Ministry and the Runners Pack of The Hague.

Two local teams consisting of both young professionals and students also participated and were successful in placing first and second in the winner’s circle. The medals were presented to the winners by Sint Maarten Council of State member, Maria van der Sluijs-Plantz.

Both the Minister and Deputy Minister Plenipotentiary were amongst the runners. After the run, all present were treated to local Johnny Cake provided by the Johnny Caker in the Netherlands through the sponsorship of IS cleaning, a company owned by young professional Luis Hurrault and Bush tea. Duarte Smith sponsored the catering services through his company DIS.

Images of the 2019 Sint Maarten’s day celebration can be seen on the Cabinet’s Facebook page courtesy of Jeffrey Richardson, who was on hand to provide live streaming of both events.

The Cabinet takes this opportunity to extend a heartfelt thank you to the over 200 patrons that took part in, attended and sponsored this year’s celebration of ‘We Story’.