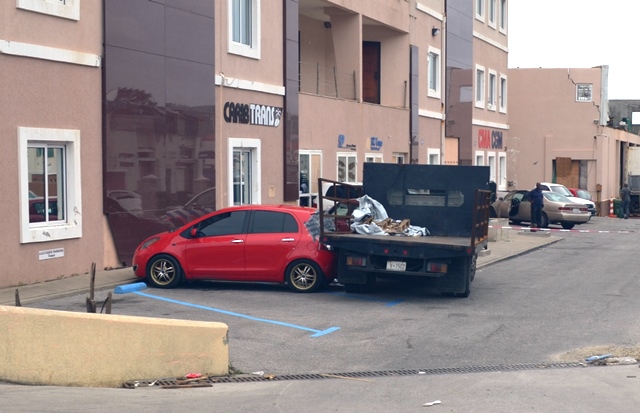 POINT BLANCHE, Sint Maarten — The Police Traffic Department is presently investigating a serious traffic incident which resulted in the driver of a heavy transport vehicle tragically losing his life. The incident took place on Saturday October 28th at approximately 02.15 p.m. on Ground Dove road in Point Blanche. Several police patrols, Police Traffic Department and Paramedics were sent to the scene to give the necessary assistance.

On the scene the investigating officers learnt that the driver of the heavy transport vehicle with license plate V-1502, identified with initials J.W.E., which seemingly had mechanical problems, for unknown reasons started rolling forward.  The driver, who at the time was not behind the steering, attempted to get back into the vehicle in order to bring the vehicle to a halt. Unfortunately in this attempt he lost his footing and was crushed between the V-1502 and another vehicle with license plate M-7279 parked on the parking lot of Carib Trans located on Ground Dove road.

On the scene paramedics immediately administered CPR but unfortunately could not reanimate the victim. A medical doctor arrived on the scene and pronounced the death of the victim. The scene was immediately closed off by police in order for the Police Traffic Department to question potential witnesses and conduct an in depth investigation. The body of the victim was confiscated and the V-1502  were confiscated for further investigation.