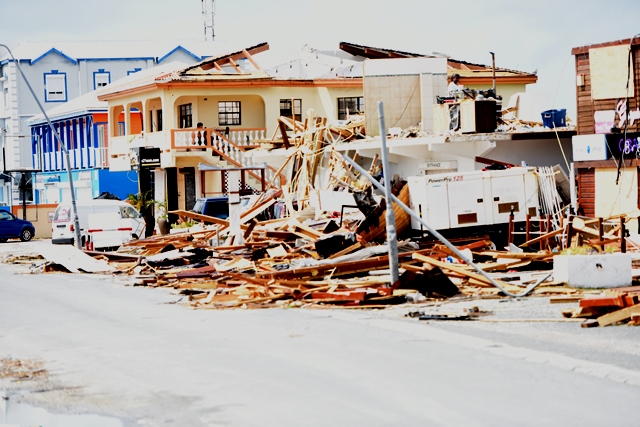 PHILIPSBURG, Sint Maarten  — Hurricane Irma did a number on St. Maarten/St. Martin and caused devastation, chaos, homelessness and looting. Communication to the outside world is limited with radio and mobile phone networks out. St. Maarten Telephone Company TelEm was one the only provider able to restore some connectivity.

Residents are in desperate need of water and food. Thus far, 43 varying levels of injuries have been treated at St. Maarten Medical Center (SMMC). According to the Prime Minister of Holland Rutte there are only 2 confirmed deaths on the Dutch side and according to French Saint Martin President 10 on the French side.

The Dutch Marines and local law enforcement are on the streets but were not sufficient in number to stem looting and keep general public order. A number of people have been arrested for looting.

The Netherlands will not abandon St. Maarten, according to Dutch Prime Minister Mark Rutte during a press conference in The Hague on Fridaymorning. More assistance is on the way. The first Dutch emergency flight has landed on St. Maarten with additional relief supplies and Defence personnel. There is a Dutch support team of 235 persons, mostly consisting of Defence personnel.

On Thursday two Defence aircrafts left Eindhoven Airport in the Netherlands, a KDC-10 and a C-130, with 110 militaries and food and water for 40,000 people for five days. The aircraft flew to Curaçao awaiting clearance of the St. Maarten runway.

Communication remains very difficult with St. Maarten. Prime Minister Rutte said that the first priority was to bring the emergency assistance on shore. A challenging task considering the damage to the harbour and airport.

St. Maarten is an autonomous country with its own responsibilities and authority and has to formally ask the Dutch for assistance. Another 235 militaries, including 40 Curaçao police officers, arrive on St. Maarten aside from the some 250 militaries already in place on the island.

King Willem-Alexander will be travelling to Curaçao on Sunday and visit St. Maarten as soon as possible. The Dutch Government Information Service RVD announced the King’s visit on Friday morning. The King will be accompanied by Minister Plasterk. In Curaçao, the King and Minister will be informed about the assistance currently provided from Curaçao by Dutch Defence in the Windward Islands and especially St. Maarten which has been the hardest hit by Hurricane Irma.