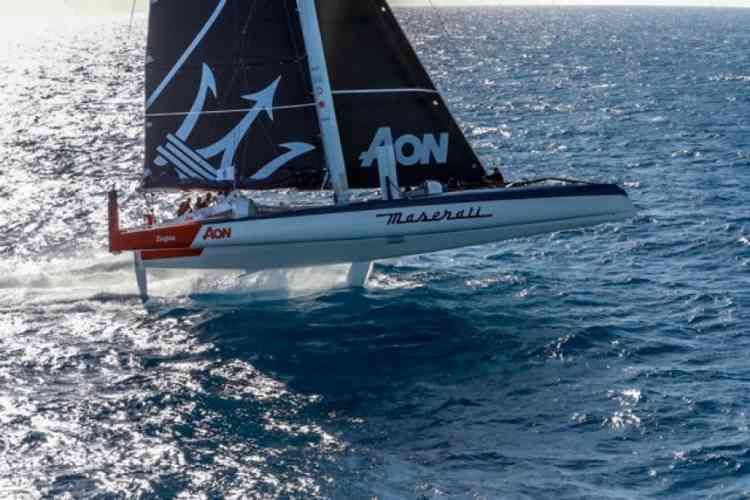 SINT MAARTEN (SIMPSON BAY – By Herb McCormick) – They are some of the most radical, cutting-edge boats on the planet, capable of slashing records and maintaining double-digit boat speeds for days or even weeks at a time. The 70-foot Multi OneDesign Class boasts some of the world’s best multihull sailors and provides some of yacht racing’s fastest, wildest competition.

Yes, a powered-up MOD 70, as they are better known, is simply a sight to behold. And one of the best places to see them, from February 14-16, will be in the blue waters off Sint Maarten, as a pair of them will vie for top honors in this year’s Caribbean Multihull Challenge.

Maserati and Argo are the two MOD 70s currently entered in the CMC, and both trimarans are using the event to prepare for the upcoming Caribbean 600, which sets off from Antigua on February 23rd. A third CMC entrant, the 50-foot catamaran Addictive Sailing, is also using the CMC as a tune-up event for the longer ocean race. It’s a growing trend, as the timing could not be better, and it provides crews with the ability to really sharpen their skills in close-quarters. The two events dovetail sweetly.

“These are extreme high-performance craft,” said Dave Reed, the editor of the U.S. racing magazine Sailing World, who has followed the inception of the MOD 70 class since its inception about a decade ago. “These boats are legit ocean racers, and in the right hands of the right crews, they’re capable of winning big ocean races, from the Transpac to the Caribbean 600.”

Legendary Italian offshore sailor Giovanni Soldini is the skipper of Maserati, the former Gitana which is now sponsored by the luxury vehicle brand. Soldini is perhaps best known for his rescue of fellow solo sailor Isabelle Autissier after she capsized in the Southern Ocean in the 1999 Around Alone singlehanded round-the-world race. Soldini never stopped competing after that adventure and has been chasing high-seas records on a variety of vessels ever since.

“Soldini has had a run of bad luck over the years, with unforced breakages from time to time,” said Reed. “But if anyone has proved his capability, it’s Soldini. He’s done thousands and thousands of miles. He’s really seen it all.”

But Soldini will have his hands full with the other MOD 70 in the CMC, Argo, which was originally known as Oman Sail and skippered by Frenchman Sidney Gavignet when first launched in 2012. Today Argo is owned and captained by U.S. sailor Jason Caroll, a most formidable foe.

Argo was the first to finish in last summer’s 50th edition of the classic Transpac Race from California to Hawaii, vanquishing two other MOD 70s in the process. The boat just had a complete refit in San Diego, with new foils and rudders, before arriving in the Caribbean.

“Jason Caroll is very much a hands-on skipper,” said Reed. “He’s worked his way up the sailing ladder, starting with a Melges 32. He’s very active, and very good.”

Maserati versus Argo is pretty much a match for the ages and will surely be a highlight of the 2020 Caribbean Multihull Challenge.

The Sint Maarten Yacht Club will host the second annual Caribbean Multihull Challenge from February 14-16, 2020. The event is open to all multihull sailors on racing catamarans and trimarans as well as chartered cats and cruising multis. For more information visit www.smyc.com/caribbean-multihull-challenge.