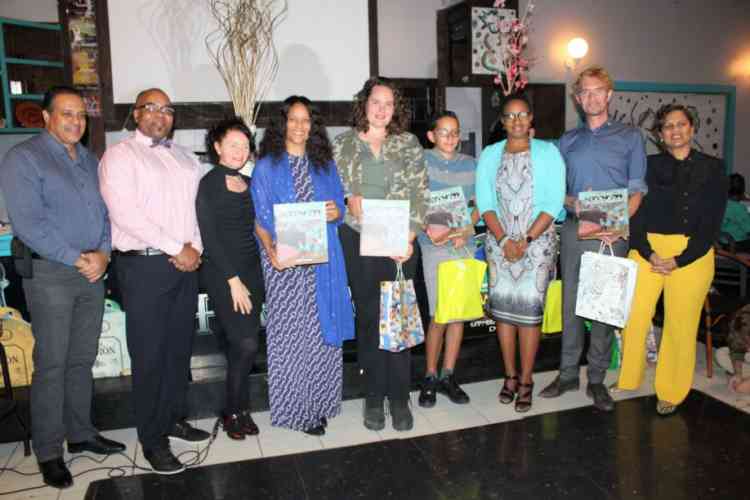 SINT MAARTEN (COLE BAY) – On Friday January 31th the book launch of STORM, the 15th spiritual child of Loekie Morales, took place at Pineapple Pete. Publishing foundation Beyond Kultura Events (BKE) invited the general public to meet the author and the ‘first-time Poets’, who also contributed to STORM, BKE said in a press statement on Sunday.

“Honorable Prime Minister (Ed. PM) Silveria Jacobs attended the event as well, on behalf of Honorable Minister of Education, Youth and Sports, Irion Ardwell. Sponsors like Pineapple Pete, the Windward Island Bank, and the Central Bank of Curacao and Sint Maarten were also present to show their support for reading development among Dutch Caribbean youth.

“STORM is about two Sint Maarten boys experiencing Irma. Also included in the book are the ‘first-time Poets’ – the winners of the Irma poem contest foundation Beyond Kultura organized. Author Loekie Morales commented: ‘I have used many of my own experiences to write the book. The character David, not coincidentally a hurricane name, describes many of my personal feelings and observations during and after hurricane Irma. For me, it was also a way of processing Irma.’

“PM Silveria Jacobs spoke about the importance of the works of Loekie Morales. She commented that STORM was another valuable cultural ‘baby’. She hopes that many other books, reading and writing programs, and cultural projects for the community of Sint Maarten will follow.

“During a ‘baptizing’ ceremony, the book’s ‘Madrina’ Mrs. Raquel Lo-Fo-Wong of the Central Bank of Curacao and Sint Maarten and the ‘Padrino’ Silvanico Pauletta of the Fire Department opened the box to reveal the book. The box was adorned with the icons of the United Nation’s Logo of Global Goals nr. 13 ‘Climate Action’. Meanwhile, hurricane noise was created by DJ SHINE.

“Beyond Kultura was happiest with the great turnout and enthusiasm of the public. STORM is for sale at The Shipwreck stores and at Beyond Kultura Foundation 5271223,” the BKE press statement concludes.