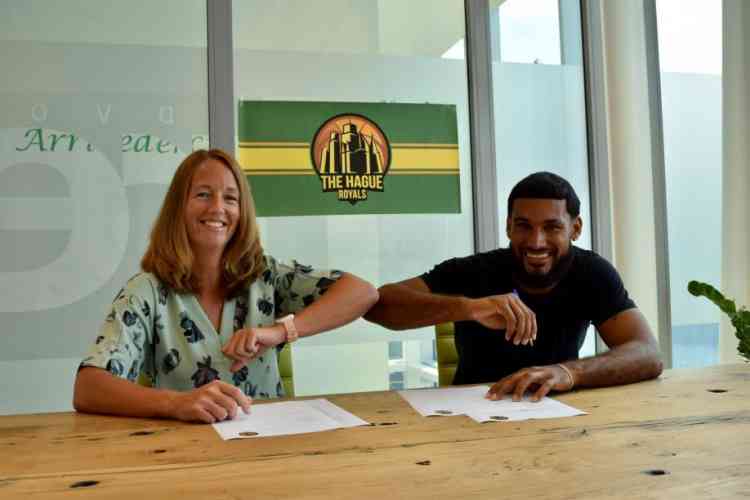 SINT EUSTATIUS (ORANJESTAD) – The Public Entity of St. Eustatius is very proud that Casey Lopes from St. Eustatius will play for The Hague Royals, the basketball institute in the Haaglanden, during the 2020-2021 season. “I can’t wait to step on the court and represent The Hague, but also the island of St. Eustatius. I’m very grateful for the chance to start my professional career and I will give everything to make a success out of it”, said 23-year-old Casey Lopes.

In the coming weeks several Statian youngsters are heading to The Netherlands to also pursue careers in basketball. According to Director of the Directorate of Social Affairs, Carol Jack-Roosberg, Casey is a role model for many youngsters in Statia. “His achievement will continue to guide him and will help to lead our youngsters to a brighter future through sports. We are very proud that he has been signed to play professional basketball in the Netherlands.”

Casey is looking forward to play for The Hague Royals. “I would like to thank The Hague Royals for giving me the opportunity to play this season with them. I am also thankful to my coach Miguel Merkman for helping me get the contacts to get the chance to try out. But I truly want to give thanks to my parents for always being there for me and helping me through this journey.

They have sacrificed so much to send me to the USA to play the game I love, and doing that has giving me the skills I need to play abroad. My father worked extra hard to support me while I was gone and my mother came to every practice after a long day of work just for “MY DREAM”. They really are the ones who should get the credit. I did the easy part. There are not enough words to let them know how thankful I truly am, said Casey Lopez after he signed with The Hague Royals.

Last week Casey left family and friends behind on St. Euststius to pursue a long awaited dream. He basketball in the United States for Western High School Auburn, until 2015. During the 2015-2016 season he redshirted for Broward College. After this season, he returned home where he played on the highest level possible on the island.

Last season, he played for Statia All Stars on St. Eustatius. Casey decided to pursue his studies in The Hague, which is why he participated in the tryouts for the team of The Hague Royals.

According to his coach Miguel Merkman, everyone is blessed with a gift in life and so is Casey Lopes. “We are a small island and there will be many more success stories to come. Statian youth will stand out in other countries. Give them dreams, work on their dreams, and keep them going on the right path. This development can only bring positivity for our island Statia.”

Diamond in the rough

Coach Samson in The Hague is excited about working with Casey. “During the tryouts, Casey was very impressive as a team player. He is a very hard worker, who will do anything for the team to have success. He brings strength and mental toughness to the guard positions in The Hague, next season. I expect a lot from his leadership, and his versatility will be very useful to our team. He is a diamond in the rough.” The Public Entity of St. Eustatius joins in congratulating Casey Lopes and his support network in this great achievement. (Statia GIS)