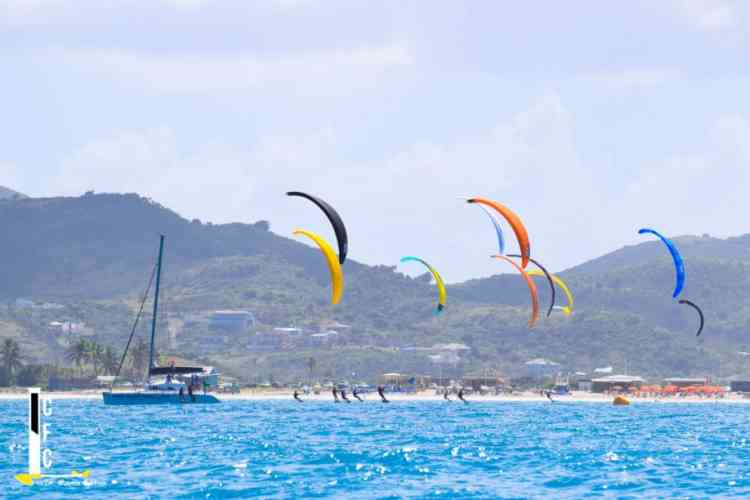 SAINT MARTIN (ORIENT BAY) – A new event kicked off on Friday in Orient Bay about foiling, a growing sport for water sports enthusiasts from the region and beyond.

40 motivated competitors gathered up in Orient Bay early on Friday to race in the very first edition of the Caribbean Foiling Championships. Racers were a mix-group of seasoned kitefoilers and windfoilers from neighbouring Caribbean islands and abroad, together with young riders who were eager to show their skills in foiling.

Foiboarding is a recent and popular development in the kitesurfing and windsurfing world. It consists of adding a hydrofoil under a kitesurf or windsurf board to limit water resistance which elevates the rider above the water. As such, foilboarders seem to be floating above the surface in a fast, free and fluid movement.

As the race was scheduled to start at 8.00 a.m., all competitors were ready early and in high spirits. The first race planned was the Around the Island Race, with the record held by Sebastien Queney from Guadeloupe who completed the tour in 1 hour and 29 minutes last year. As the championships has two categories, a professional and a leisure category, many professional riders were driven to break this record.

Most of the younger riders, as young as 14 years old like Ella Geiger from Antigua and 15 years old Justin Pieterse from Sint Maarten, had never raced in a long-distance race before. Nolan Bourgeois, 14 years old windfoiler from Guadeloupe said: “I am a bit nervous, but I really want to make it to the finish line, and I think I can even challenge some of the adults.”

Female riders were also in the starting blocks, well decided to show their skills and have fun. “It’s not my first time in Sint Maarten but first time foiling here” said Cora Maziere from Martinique, backed up by her team of supporters.

Unfortunately, the wind was too low, and the weather became overcast. While waiting for the wind to pick up, contestants happily mingled together and shared their foiling stories. Contestants were coming from as far as Greece, the Netherlands, France, Puerto Rico, Venezuela, Antigua & Barbuda, Martinique, and the Guadeloupe windfoiler team even chartered their own plane to come down due to the large volume of their gears. Tourists joined as well inquiring about this new sport, and excited to see a new event taking place, in a friendly spirit on the friendly island.

Eventually, the Race Officer and Emmanuel Demanez, owner at Windsurf Adventures in Orient Bay, decided that the race could not take place under those conditions’ safety-wise, which is a top priority for the Caribbean Foiling Championships. It was decided that the race was going to be around Tintamarre. After lunch break, the wind finally picked up and the sun got out as competitors were busy preparing their kitefoils and windfoils.

Referees from the French Federation of Sailing coming from Guadeloupe gave the go-ahead of the race. Windfoilers started first, followed by the professional kitefoilers. The strength of the wind remained a challenge and a couple had to drop out, helped by the rescue boats of Wind Adventures. The leisure category race was cancelled as it would have been too difficult for contestants to go upwind.

Young Eliott Pierre-Heym from Saint-Martin was the last to make it to the finish line on his windfoil, proud to have completed the full tour and not giving up, welcomed on shore by his dad and siblings. Maite Benvenu, also racing on a windfoil, said: “With this low wind it was difficult to race but the color of the water is so nice, and we saw dolphins on the way back!”. The pros continued to kitefoil in the bay until sunset.

Even if they did not all race, all contestants were able to go out on the water and have fun during the afternoon. Paddle boards, wakeboarding and other watersports were available. Sacha van der Wouden and Maxim van den Pol, the organizers, explain: “We’re always dependent on weather condition for foiling, it’s a sport very much in touch with nature and we cannot do much about it, but still make sure that everybody has a good time”.

The event is still on for Saturday and Sunday in Orient Bay, where professional and leisure foilers alike are ready to put on a show and encourage more people to try out this new sport. 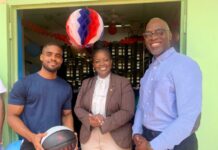 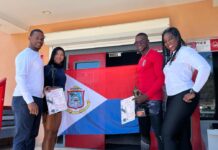