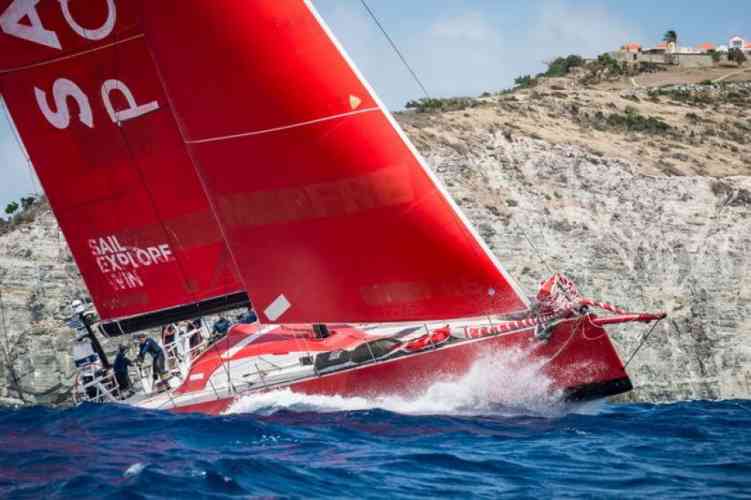 SINT MAARTEN (SIMPSON BAY) – The countdown for the highly anticipated 40th running of the renowned St. Maarten Heineken Regatta is well and truly underway. The 2020 Anniversary Edition of the famed event is scheduled for March 5-8. And the preliminary scratch sheet for the 40th now sits at over 130 entries competing in a half-dozen dedicated classes of monohulls, multihulls, ocean racers, bareboats and even cruising boats. It is shaping up to be one memorable regatta on multiple levels. And a look at the entry list reveals an intriguing mix of long-time competitors and highly anticipated newcomers.

The tightest racing will surely come in the Ocean Racing division, currently comprised of 14 Grand Prix race boats, highlighted by a trio of powerful Volvo 70 round-the-world campaigners: Johannes Schwarz’s Green Dragon and Grzegorz Baranowski’s I Love Poland will both be sailing under the Polish flag, while Lance Shepard’s Telefonica Black will compete under the United Kingdom’s Union Jack.

But the international roster of skippers in the Ocean Racing fleet reads like a meeting of the United Nations. For example, Chris Stanmore-Major, sailing the Whitbread 60 Challenger, is representing Canada’s Lunenberg Yacht Club in Nova Scotia and is one of three Canadian entries in the class. Jeremi Jablonski’s Hanse 43, Avanti, is from the U.S.; and Per Arne Nilson’s Swan 66, Enigma VIII, will represent Norway. But of course, there are entries from close by St. Maarten as well, especially Don Terwilliger’s Beneteau First 47.7, Dauntless, from the host Sint Maarten Yacht Club, and the class’s smallest entry, Luis Juarbe’s Melges 32, Soca, from San Juan, Puerto Rico.

With a solid 50 entries to date, the monohull fleet is truly an eclectic collection of yachts, hailing not only from around the Caribbean, but literally around the world. For instance, Grace O’Malley is a Cookson 50 helmed by Zoe Taylor, who hails from New South Wales, Australia. Mikhail Mataruev’s Anna is a Mobile 50 all the way from St. Petersburg, Russia. And Morgane Ursault Poupon’s Class 40 Up Sailing comes from the sailing-crazed community of St. Malo, France.

There are no less than seven entries from the popular J/Boat brand, including Peter Lewis’s J/121 Whistler from Barbados, New Yorker Jordan Mindich’s J/105 Solstice and local favorite Garth Steyn’s J/70 Franny from beautiful Simpson Bay. Among the mega-builder Beneteau’s many entrants are three First 40.7’s, all from the U.K.: Ken Docherty’s Playing Around, Germaine Williams’s Escapado and Chris Clark’s Fireball. And no St. Maarten Heineken Regatta is complete without a few powerful Swan yachts; the biggest of them all this year is Philip Rand’s Swan 80, Umiko.

Numbers-wise, the Bareboat fleet is just behind the monohulls, with 49 entries to date. Sailors from the Netherlands, Germany, Russia, the U.S., Switzerland, France and the U.K. will all be descending on St. Maarten to race their chartered yachts. They will all have to watch out for perennial Bareboat winners Michael Cannon and Neil Harvey on KHS&S Contractors, a Jeanneau 509.

Ten boats are registered in the Multihull contingent thus far, which is heavily tilted toward versatile Leopard yachts, built in South Africa. Two local sailors will rekindle their long-time rivalry: Ian Martin, on the Leopard 50, Spellbound, and Petro Jonker on the Leopard 47, Seaduction. They may have their hands full with veteran St. Maarten Heineken Regatta sailor Vladimir Kulinchenko, competing in 2020 aboard a Leopard 45, Mere Cat.

Last but hardly least is the Island Time division devoted to cruising sailors who also enjoy a slightly more relaxed version of yacht racing. The cool class was founded by American Hank Schmitt, who will once again be competing aboard his Swan 48, Avocation. Another longtime Heineken stalwart, St. Maarten’s own Robbie Ferron, is joining the fun with his souped-up Nonsuch 33 cat boat Bunglebird, which sports a carbon-fiber rig. German skipper Norbert Hoesserman’s Hanse 470, Peer Gynt, will also be one to watch in this group.

There’s still time to register for the 40th Anniversary Edition of the St. Maarten Heineken Regatta. It’s one you don’t want to miss.