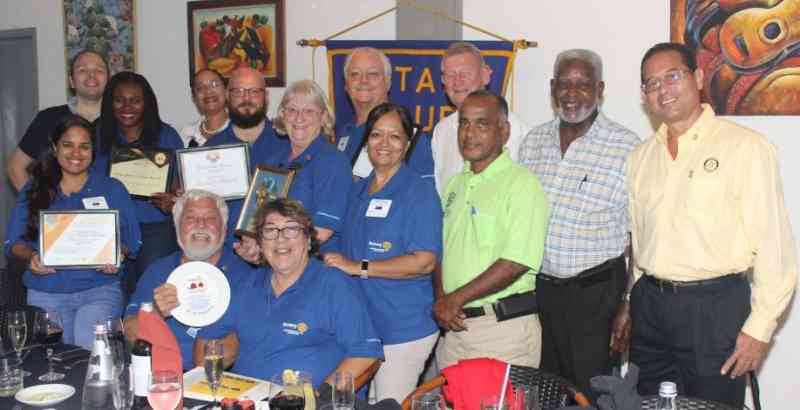 SINT MAARTEN (PHILIPSBURG) – At the recently concluded Rotary District 7020 45th PETS Training and District conference and Assembly 2018-2019 in Kingston, Jamaica, The Rotary Club of St. Maarten-Mid Isle and its Rotarians were recognized for their work and ‘Service Above Self’ during the Rotary year 2018-2019, a press release from the Club said on Sunday.

“It was a proud moment for all the clubs in our area when it was announced that Louis Wever was ratified as District Governor Nominee Designate and will be The District Governor for District 7020 in the Rotary year 2021-2022.  DGND Louis also received a special award for being an outstanding Rotarian in District 7020.

“Foundation Chair David Antrobus received a District Service Award for promoting the Rotary Foundation and   its goal of world understanding and peace. The Foundation is the charitable arm of Rotary.

“There were four possible awards that each club could have received at the conference this year. Mid Isle received all four: The District Governor’s Award in the Platinum category,  The Zone 34 Public Image Citation – this was for Enhancing the public image and awareness of Rotary  to the public in various ways, The Club of the Month (COTM) in gold category  – this was for reporting consistently each month on what projects the club had done for the Rotary Focus for that month, and a Certificate of Appreciation ‘For Sharing Your Love for Rotary by Empowering our Young Generation: this certificate of appreciation was for our work with the youth in our EarlyAct and Interact Clubs.

“President Denise Antrobus, District Governor Nominee Designate Louis Wever, Rotary Foundation chair David Antrobus, and President Elect Aernout Kraaijeveld were all recognized by the district as Paul Harris Society Members and were pinned with their chevrons by Rotary International Vice President, John Matthews.  Paul Harris Society members bring positive change to communities around the world. In any given year, less than 3 percent of Rotary Foundation donors contribute at the Paul Harris Society level or above, yet their contributions represent approximately 35 percent of all annual giving.

“As Rotary Foundation grants and activities are largely funded by Annual Fund contributions, Paul Harris Society members help determine how many individuals, families and communities Rotary can impact each year. Globally, more than 20,000 people are members of the society, which was established in 2013. These dedicated donors share a desire to give substantially and empower Rotary clubs to change lives in their community and around the world.”