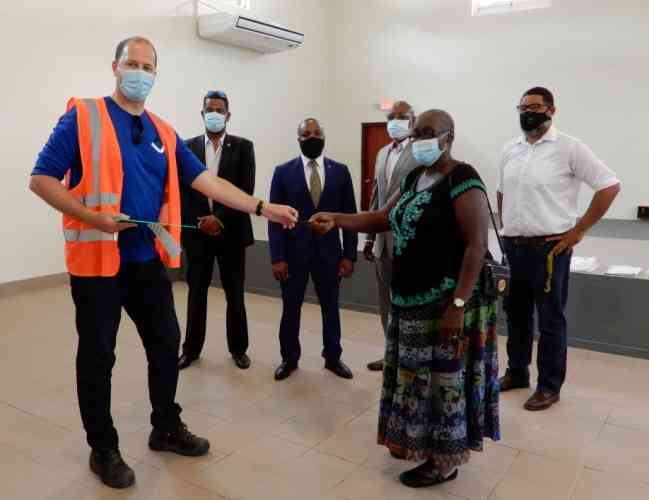 SINT MAARTEN (POND ISLAND) – The Minister of Public Housing, Spatial Planning, Environment & Infrastructure (VROMI), the Honorable Egbert J. Doran, has the distinct pleasure to announce the completion of the works at the four priority shelters. The four shelters are the Dutch Quarter Community Center, the Rupert Maynard Community Center, the gym hall at the Milton Peters College and the National Institute of Professional Advancement (NIPA).

As a representative of the people of Sint Maarten and in the position of Minister of VROMI, Minister Doran stated that his first objective since taking office was to ascertain the status of the hurricane shelters. In preparation for the hurricane season, the Minister visited the shelters to assess the damages caused by the passing of the hurricanes in 2017 and the necessary works to be done.

In July, Minister Doran, along with the Minister of Public Health, Social Development and Labor (VSA), the Honorable R. Panneflek, witnessed the signing of the contract for the start of the reparations of the shelters. Even though the procedure at the NRPB and the World Bank has been a lengthy process, Minister Doran nevertheless stated his content with the final results.

On Thursday, August 27, the Minister together with Minister Panneflek and representatives of the National Recovery Program Bureau (NRPB), toured the shelters along with the contractors.

Minister Doran stated during his short speech that the shelters were of vital concern to him during his tenure as a Member of Parliament and still is today. While expressing his satisfaction for the completion of the works, the Minister further thanked his colleague Minister Panneflek, the NRPB, the contractors and especially the Department of New Projects who worked diligently to ensure the success of these projects.

At the end of the tours, the Ministers officially handed over the shelters to their respective managers, who expressed their gratitude in seeing the completion of the works.

Additionally, even though the shelters should be seen as a last resort, Minister Doran once again advises persons, who require sheltering prior to the passing of any tropical storm or hurricane, to make use of the early online registration form.

Minister Doran is assuring the community that the staff at the Ministry of VROMI and himself are working diligently in order to serve the people of St. Maarten in an optimal manner.