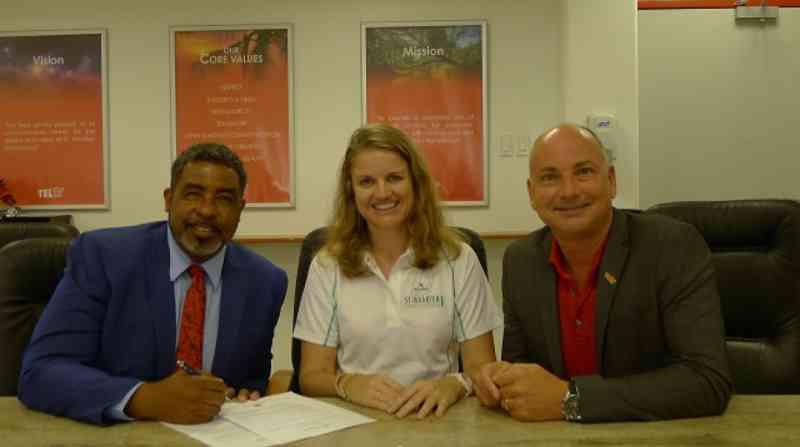 SINT MAARTEN (POND ISLAND) – TelEm Group has been named the official telecommunications provider for the St. Maarten Heineken Regatta 2020. The announcement was made Tuesday, during a sponsorship signing ceremony between the Sint Maarten Yacht Club, the organizers of the event, and TelEm Group CEO, Mr. Kendall Dupersoy.

TelEm Group and the Sint Maarten Yacht Club consider their relationship as more of a partnership than a sponsorship because of their shared goal to profile the Caribbean’s premier sailing event internationally to the benefit of the island and its people, and St. Maarten tourism generally.

CEO, Mr. Kendall Dupersoy, said an appeal was made to the company to provide telecommunication services for the St. Maarten Heineken Regatta when they found themselves without its usual support for this year’s historic anniversary event.

“I spoke to my commercial team and it was clear that coming in with only two weeks before the start of the St. Maarten Heineken Regatta would present us with some major challenges, but it was evident that the organizers were in need of a telecommunication provider and we are deeply honored to now be part of such an important event that means so much to tourism in the St. Maarten and the boating community internationally,” said Mr. Dupersoy.

The CEO said technicians and engineers are right now in the field putting a customized infrastructure in place that will utilize the company’s mobile wi-fi networks and also TelEm Group’s state-of-the art fiber cable connections – providing the fastest broadband throughput on the island.

TelEm Group Commercial Director, Mr. Michiel Parent, says TelEm Group has already started it commercial branding as the official communication provider for the St. Maarten Heineken Regatta, including the launch of special top-up packages offering 2GB of FREE data with the purchase of tickets to the event’s headlining shows on Saturday 7th (featuring Inner Circle) and Sunday 8th March (featuring Flo Rida) respectively. Tickets for both shows will also be available at TelEm Group locations on Pond Island in Philipsburg, as well as the branch in Simpson Bay.

“It will be up to us to keep the various teams of volunteers from all over the world connected to each other and to the event and also to provide the cleanest most reliable data and voice services to sailors and members of the public taking part in and also those spectating,” said Mr. Parent.

“As a token of appreciation, all the sailors will be getting TelEm sim cards and additional things to sweeten their introduction to our company,” continued Mr. Parent.

The Commercial Director said not only will the customized telecommunication infrastructure have to deal with the usual capacity in the Simpson Bay area during peak hours of the day, but will now have to accommodate the thousands more users who will be making demands on the TelEm Group network to call home, stream, upload, send pictures and video around the clock.

The mobile network capacity in the area of the event has already been expanded.

There will also be a Wi-Fi zone in the Regatta party area, which is another major undertaking for the new St. Maarten Heineken Regatta telecom provider since the zone has to be built up from scratch.

“We are doing our absolute best to make sure everything will happen on time and we have our best Technical team on it,” said, Mr. Parent.

Mr. Parent said he is being perfectly honest with the event organizers and participants in the St. Maarten Heineken Regatta by saying up front that this company’s last-minute involvement in the Regatta event is uncharted territory and the short time does not allow TelEm Group the luxury of extensive testing before the opening of the Regatta Village on March 2, and the start of the event proper on March 5.

“We have all confidence that a high level of communication for the event will be pulled off, but I know for sure that next year we will be fully prepared well in advance and we are already talking to the organizers about long-term relationship,” added Mr. Parent.

St. Maarten Heineken Regatta Director, Michele Korteweg, says she is most grateful to TelEm Group for their intrepid action in setting up the necessary telecommunication infrastructure with literally only days left before the staging of the Caribbean’s premier sailing event.

“We are happy to have TelEm Group on board and we are most thankful to Mr. Dupersoy for responding positively to our request to have TelEm as the official telecommunication provider for our 40th Anniversary event this year,” continued Ms. Korteweg.

The event organizer says the importance of the St. Maarten Heineken Regatta is reflected in the impact that it brings to the economy of the island.

“As a non-profit organization it is very important that our partners and sponsors recognize that we do this to bring people to the island. We want to create return visitors because they fall in love with the island. For others, like TelEm, to recognize the effort and join in that effort is very valuable to us,” said Ms. Korteweg.