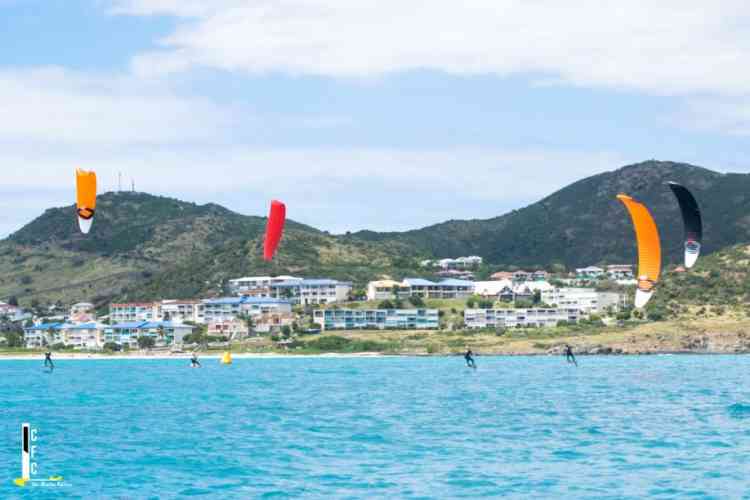 SAINT MARTIN (ORIENT BAY) – 16 year old professional kitefoiler from Barbuda, the sister island in Antigua and Barbuda, wins race on second day of the Caribbean Foiling Championships, the first event of its kind in the Caribbean, taking place in Orient Bay from February 21-23, the organizers said in a press statement on Saturday.

“Saturday 22nd of February was Day 2 of the Caribbean Foiling Championships. It started as an optimistic morning, all competitors were already in full gears at 8.30 a.m. waiting for the wind. Fueling on fruit juice and fresh apples provided, they were all excited for a healthy and sporty day out on the water.

“Around 10 a.m., the wind started building up as a cloudy system was coming from a southeast wind towards Orient Bay. The course of the race was explained by the Race Officer and all heads nodded in approval, most liked how the race was set-up. Buzzing and rushing around, all competitors went in the water ready to race. Unfortunately, the wind dropped as quickly as it had arrived and contestants had to come back to shore, or with the help of the rescue boats of Wind Adventures.

“In the afternoon, clear skies made way to a timid wind and all contestants went back in the water, well decided to give it a try. The race was officially launched for the professionals only, having a special type of kite that works in light wind. The windsurfers could not get enough speed to start foiling, and the kites used in the leisure category were not adapted to the conditions. Florent Parrossel from Saint-Martin, registered in the leisure category takes it with a calm attitude: “I came to have fun and I only brought a small kite of 9 square meters. If there is not enough wind I prefer to enjoy the day at the beach.

“Coming from Barbuda, 16 years old professional rider Tiger Tyson came in first of the race after doing a tactical tack move that got him well ahead in the race. He explains in a determined way: “It was super light and gusty wind but those are actually my favorite conditions. I’m very happy and looking forward to hopefully a good day of racing tomorrow.” Olivier Blotière from Martinique came second of the race and sums up with a smile: “It was complicated, but we were able to foil for a while even before the start of the race. Orient Bay is a beautiful playground for foiling.”

“Members of Saint Martin Tourism Bureau also came for a visit during the afternoon. Cheering with the crowd as a professional kitefoiler managed to relaunch his kite from the water, a technical move when there is lightwind, they said that events such as the Caribbean Foiling Championships bring excitement to the island.

“Overall, it was a fun and positive race day, with a friendly spirit over competitiveness. A volunteer for the event recaps: “What I liked most about today is how all competitors were really excited as soon as they could feel a gust of wind. They all kept having trust that the wind was going to come, they were dedicated and focused on the competition. But no matter what, they were all helping each other out to set-up their gear and come in and out of the water.”

“Sunday 23rd is the last day of the Caribbean Foiling Championships with an early raced planned if there is no lack of wind. Prize giving is scheduled at 2.30 at Wind Adventures in Orient Bay.”