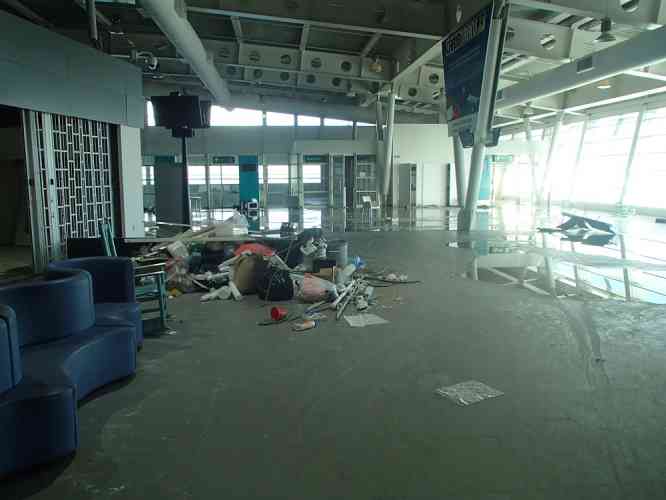 GREAT BAY – As a follow-up to a unanimous decision of the newly installed incoming Council of Ministers (COM), a delegation consisting of Minister of Finance, Michael Ferrier, Minister of Public Health, Social Development and Labor, Emil Lee, Minister of Public Housing, Spatial Planning, Environment and Infrastructure, Miklos Giterson and Deputy Minister Plenipotentiary Hasani Ellis, were given a tour of the Sint Maarten Airport Terminal Building (ATB) in the afternoon of Monday, January 15, the same day the Council was sworn in.

Prior to his departure to Curaçao for his first ‘Justitieel Overleg (JVO)’, Minister of Justice Cornelius de Weever, also visited the airport building.

Management and board of SXM Airport were present and conducted both tours for the delegation, as well as for Minister de Weever.

It was pointed out to the representatives of the airport that the public’s perception of St. Maarten’s ATB [Airport Terminal Building – Ed.] is that after four and a half months post-hurricane Irma, the main portal of St. Maarten’s economy is still in shambles and that seemingly very little has been done to repair the destruction.

While according to the airport officials present, improvements are being made, amongst which having a baggage handling system that is now about 80% functional, the conditions of the ATB appear to have been allowed to deteriorate daily, according to the visiting ministers.

Practically the entire roof continues to leak unabated even today, resulting in mold throughout the entire facility. The queries and concerns expressed during the tour were responded to, but to a large extent, the responses spawned new questions.

Additional information will be provided during a special Council of Ministers meeting with the board and management of the airport scheduled for Friday, January 19, 2018.

The main agenda topics will be an update on the planned repairs of the ATB, the status of the insurance claim and the short and long-term plans for a bigger and better St. Maarten airport.

PHOTO CUTLINE: Photos taken of inside the ATB.