Home Local News Damaseau: “We jamming still despite the circumstances” 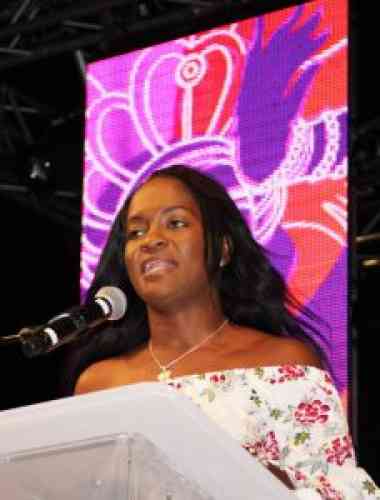 Marigot — Just short of five months after hurricane Irma caused major structural damages on both sides of the island, the Festivites Carnalalesque De Saint Martin (FCDSM) has defied all odds to kick the biggest cultural event on that side of the island last Saturday evening.

Due to the state of the Carnival Village in Galisbay, the taxi parking lot on the water front which was transformed will be the center of attention for the next few days. The FCDSM have also catered for a limited amount of boothholders that can be found at the far end of the cordoned off area.

“The opening of this Carnival season demonstrates the resilience of its people. Carnival is you, Carnival is me, but more importantly Carnival is us. It is we culture and you can count on our support to create what was long overdue, a true partnership,” said the 1st Vice President of the Collectivity and President of the Tourist Office, Valerie Damaseau.

Damaseau took the opportunity on behalf of the President of the Collectivity Daniel Gibbs and the Territorial Council to laud the efforts of the FCDSM for organizing a superb line up of entertainers under the circumstances and noted that she will be looking forward to the ‘Strictly Local Night’.

The FCDSM President, Raspail, who was attired in a full Carnival costume may have set the bar in her capacity. Her pro active approach to the festivities is her way of leading by example and by extension a way of getting more people involved.

“This is it, we culture, we fete, Saint Martin must smile again and Saint Martin is smiling again,” she stated in her opening remarks. According to Raspail, the 2018 schedule of events is special in many ways and she had her reasons for saying that.

“Without the commitment, energy and strong will and goal of my SCDSM family, we would have been here and I thank them for the tremendous work they have poured in despite the situation. I must also let them know that I am grateful for the confidence they have entrusted in me. For the next few days, the streets are the stage for the display of splendor and creativity,” she pointed out. Before declaring the season opened, Raspail took the opportunity to thank the various sponsors for their unstinting contributions.