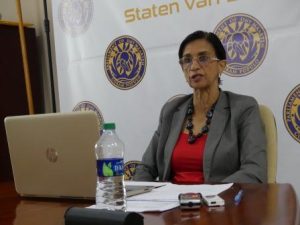 PHILIPSBURG – “The discussion is not about the right of the government to use article 59. No one is disputing that. But I have a serious problem when it is used at a time like this,” DP-leader MP Sarah Wescot-Williams said at a press conference on Wednesday afternoon.

Governor Drs. Eugène Holiday has appointed UP-MP Franklin Meyers as informateur. His task is to explore the options for a broad-based government but also to execute the elections and to take steps to realize electoral reform.

“I think that when the dust has settled, Parliament needs to have a serious discussion about the role of the governor in this process,” Wescot-Williams said.

While informateur Meyers is tasked with executing the elections, the new majority in Parliament of which he is a part “has expressed its objections against the national decree to dissolve the Parliament and to call elections,” Wescot-Williams said.

The DP-leader said that her request to the government for the draft integrity chamber legislation and the mutual agreement on border control met with a negative response. “The answer was: not yet; they want to finalize the draft and send it to Parliament through the regular process.”

Wescot-Williams did wonder why the government did not send her the mutual agreement on border control, since this is not a draft law that is subject to approval by the Parliament.

On Thursday the Parliament discusses the decree to dissolve the Parliament and to call for elections. “That decree is going against all legal and practical arguments,” Wescot-Williams said. That Nomination Day is coming so fast – next Monday – has put the DP-leader “in a predicament,” she said. “What if only one list is submitted? They would get all fifteen seats.”

That this is not going to happen is already clear: the USp could not be fast enough with a statement that it would not erect billboards for these elections and the National Alliance announced its change of leadership (“a vote of no confidence against the prime minister,” Wescot-Williams said), whereby Silveria Jacobs will head the list and political stalwart William Marlin will still be a candidate. The DP will also not wait on the sidelines, nor will the UP.

Wescot-Williams is aware of the petition against the elections but said that it has no legal meaning. A low turnout for the elections has no meaning either, she said.

“I hope that the governor comes to his senses before Monday,” Wescot-Williams added. “When did we ever before have elections under these circumstances? We have to find special measures. There is too much to be done and we have no time for elections in January, April or the whole of 2018.”

Continuation Committee of Public Health, Social Development and Labor (VSA) of Parliament to meet with the Minister of Justice and the Minister of VSA regarding immigration/residency and work permit...