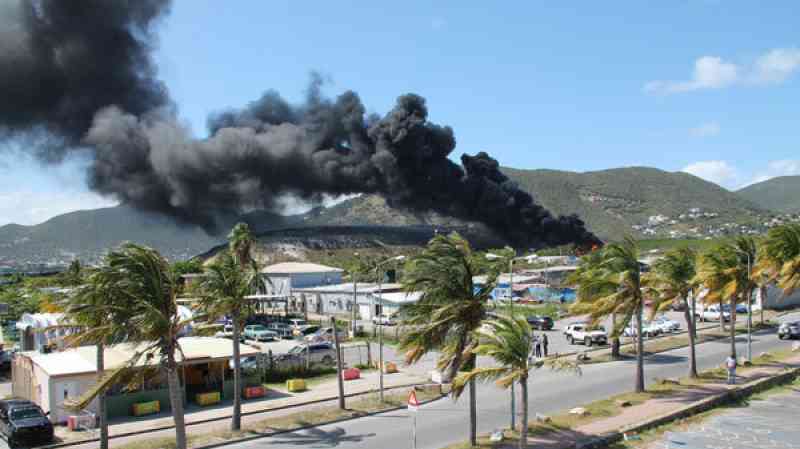 PHILIPSBURG – The Ministry of Public Housing, Urban Planning, Environment and Infrastructure (VROMI) does not spend a word on the situation at the dump in the draft 2018 budget.  Under a heading that addresses the quality of life, the ministry only mentions plans for the development of a waste-to-energy plant, developing and implementing a recycling program and promoting sustainable energy.

Furthermore, in a list of risks, the ministry notes that the management contract for the landfill has to be “timely extended or tendered again” while Minister Emil Lee said in February that the contract with the management company actually was hastily extended for a year in December by the outgoing government – in this case by former VROMI-Minister Christophe Emmanuel.

In the meantime, the ministry has other problems too. It needs in 2018 250,000 guilders to pay former ministers. But: “Within the budget there is no space for this provision.” That suggests that former ministers who are entitled to compensation for a maximum of two years after leaving office, will not get paid.

VROMI’s financial troubles are not restricted to its former ministers. Staff is also in the line of fire: “The budget for personnel is insufficient to pay salary costs and the mandatory payments for jubilees and annuities.”

To combat its financial woes, VROMI announces in the budget plans for the establishment of a garbage and a sewage tax. Those are only plans for the time being; the draft 2018 budget does not list revenue derived from these proposed taxes.

April 24, 2018
0
PHILIPSBURG – The government organization currently employs 1,822 civil servants, but all departments struggle with staff shortages it appears from an overview in the draft 2018 budget. If all positions the civil service requires were filled, the government would...
Read more

April 23, 2018
0
By Hilbert HaarAn alert reader pointed out to me that the price the waste-to-energy plant would charge GEBE for a Kilowatt of electricity is...