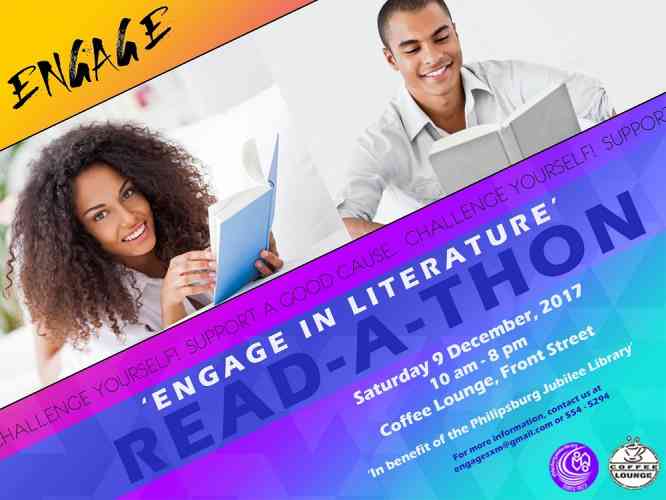 Philipsburg — ENGAGE foundation and the Coffee Lounge have teamed up to support the Philipsburg Jubilee Library with a 10 hour read-a-thon. The Read-a-thon is the brainchild of the Engage Foundation, as the foundation strongly believes in the power of literature and its importance in building our nation and empowering its people.

The foundation was saddened to learn of the damages hurricane Irma caused to the Philipsburg Jubilee Library. As Andrew Carnegie so fittingly stated “A library outranks any other one thing a community can do to benefit its people. It is a never failing spring in the desert.”

The proceeds of the Engage in Literature First Annual Read-a-thon Fundraiser on December 9th will be in their benefit. The 10 hour event will be hosted at the Coffee Lounge on Front Street from 10:00AM to 8:00PM. Throughout the day there will be new and used book sales as well as book signings by international and local authors. Corporate teams have been invited to take part and persons are welcomed to participate individually for $20.00USD.

The Engage in Literature recommended book list includes; Think and Grow Rich by Napoleon Hill, The 7 Habits of Highly Effective People by Stephen Covey, How to Win Friends and Influence People by Dale Carnegie, Chicken Soup for the Soul (The Original) by Jack Canfield, Mark Victor Hansen and Amy Newmark, Change Your Brain, Change Your Life by Daniel G. Amen, The Subtle Art of Not Giving F*ck by Mark Manson and Awaken The Giant Within by Tony Robbins. Although participants are encouraged to read from this list, these books are however not necessary for partaking and participants may read any book of their choosing.

“We would like to thank the Coffee Lounge for unhesitatingly supporting this initiative and accommodating the event. Even in such economic times they have generously offered us the use of their venue and will be donating a percentage of sales made during the read-a-thon. So, grab a friend, your favorite book and come out for a worthy cause.” the board said.

February 7, 2023
0
U.S. Consulate General Curacao Announces 2023 Fellows for the Young Leaders of the Americas Initiative (YLAI)The U.S. Mission to the Dutch Caribbean is proud to announce the 2023 cohort for the U.S. Department of State’s Young Leaders of the...
Read more
Local News