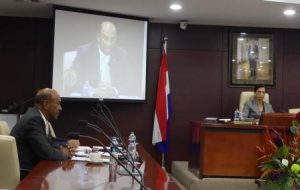 PHILIPSBURG – Hurricane Irma has destroyed the points of departure that underpinned the 2017 budget,” Minister of Finance Richard Gibson Sr. said in a central committee meeting of Parliament on Wednesday afternoon. The minister referred to article 25 of the kingdom law financial supervision that allows for diverging from the budget rules in case of “damages caused by extraordinary events.”

The minister did not say however, that such a divergence requires a decision from the Kingdom Council of Ministers.

Minister Gibson came to Parliament to answer questions MPs had asked during a meeting that took place last Monday. Before he addressed the individual questions, the minister painted a picture of St. Maarten’s financial position based on the October note from the Central Bank.

That document projects 3.7 percent negative economic growth for 2017, due to damages caused by Hurricane Irma. The note states that the budget showed a surplus of 654 million in the first six months of 2017 and that revenue was up 17.4 percent during the first two quarters of the year.

Due to the decline in the domestic component, public debt will rise to 589.1 million by the end of the year, but St. Maarten’s debt to gross domestic product (GDP) ratio, which stood at 33.4 percent at the end of 2016, had gone down to 31.7 percent by the end of the second quarter.

Minister Gibson compared this to other countries in the region: Jamaica (122.6 percent), Barbados (108.9 percent), Aruba (82 percent) and – last but not least and a bit further away – the Netherlands (62.3 percent).

“This indicates that we have some room, even compared to the Netherlands,” Minister Gibson said. “I am not a proponent of increasing the national debt because debts have to be paid back, but after Hurricane Irma we have no choice. We have to attract loans to cover our budgetary obligations.”

An increase of 1 percent in the debt to GDP ratio represents 20 million guilders.

“We are unable to borrow all the money we need,” Minister Gibson warned. “The International Monetary Fund says that the limit in the debt to GDP ratio for small island states is between 40 and 45 percent. The question is: what would be reasonable?

“If we put it at 55 percent we could borrow 22.4 percent of our gross domestic product, but we do not have unlimited capacity to borrow.”

The Receiver’s Office collected 14 million in taxes in October, the minister said in answer to a question from UP-MP Tamara Leonard.

To DP-MP Perry Geerlings, the minister said that the government would be lenient with the collection of taxes and that collection from businesses has been postponed until January 15 of next year. “For individual citizen it will be judged on a case by case basis.”

Minister Gibson then launched an idea: “Let us make Philipsburg a profit tax-free area. That should attract the interest of businesses. Such a measure could cause a lot of people to take a good look at Philipsburg as a place for doing business.”

Anyone can open a business,” the minister said. “All it requires is registration at the Chamber of Commerce and a crib-number. No more red tape, no more waiting. Start your business.”

The minister said that the plans to add the remaining money from the division of assets of the former Netherland Antilles to the country’s investment fund. However, he said, “We must make sure that we have the money to pay our operational expenditures.”

Currently all capital investment plans are on hold. Lastly, the minister said that the government will not receive any dividend from government-owned companies “for a couple of years.”

January 26, 2023
0
PHILIPSBURG:--- In celebration of International Customs Day, the World Customs Organization has dedicated 2023 to Nurturing the Next Generation: promoting a culture of knowledge-sharing and professional pride in Customs. Every year on January 26th, International Customs day celebrates the...
Read more