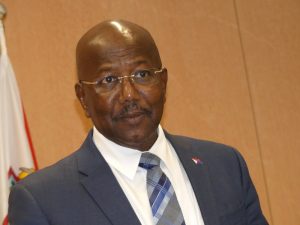 GREAT BAY – The Council of Ministers decided yesterday to adhere to a comment from the Council of Advice on its draft ordinance for the establishment of the Integrity Chamber, thus removing an important obstacle from the standoff with the kingdom government about conditions attached to aid for reconstruction.

The Council of Advice notes in its advice to the government that this diverges from what the government agreed to in the protocol former vice Prime Minister Dennis Richardson signed with (also former) Minister of Kingdom relations Ronald Plasterk on May 24, 2015 – and that this is not correct. In that protocol parties agreed to appoint one member nominated by the Kingdom Council of Ministers, one by the council of Ministers of St. Maarten and one appointed by these two nominees who would also be the chairman.

Marlin emphasized that he had never rejected aid from the Netherlands. “Last Thursday I said that we need aid and that we cannot go it alone. Our issue was with the conditions the Netherlands attached to financial aid.”

The Council of Advice pointed out that the agreement that was reached on July 6 of this year used the 2015 protocol as its basis and that the draft legislation nevertheless diverged from it.

Marlin said that the government had sent a letter to the Dutch Council of State – an update on the progress with the Integrity Chamber legislation that also explains the troubles St. Maarten encountered due to Hurricane Irma.

“The intention is to send the draft ordinance mid-November to parliament,” Marlin said, adding that the government cannot bind parliament to a date for handling the draft.

The Integrity Chamber will be established for a period of four years, with an option for an extension of another three years, marlin said.

The government will also agree to add more Marechaussee and Dutch customs officers to the existing flex pool “as long as the constitutional integrity remains intact.”

Mid-November there will also be a conference to work out the details of executing the aid St. Maarten will receive from the Netherlands. State Secretary Raymond Knops (Kingdom Relations “seems willing to have a discussion,” Marlin said.

St. Maarten has been rife with rumors and stories about the imminent fall of the Marlin-government. Last Friday, the President of Parliament, DP-MP Sarah Wescot-Williams, said in a public meeting that if she could not take the position she did (saying that St. Maarten should not close the door on Dutch aid), she had no place in the coalition.

MP Chanel Brownbill (United St. Maarten party) issued a statement on Sunday evening that seemed to suggest that he sided with Wescot-Williams, thereby making the fall of the government as possibility.

But Marlin said on Monday afternoon in answer to questions about the state of the support for his government in Parliament that he had not received any information about anyone withdrawing from the coalition.