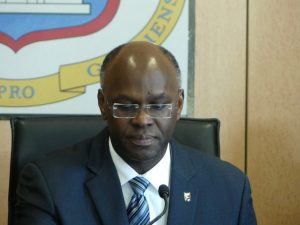 PHILIPSBURG — Governor Drs. Eugène Holiday started on Friday with consultations “to explore the formation of a new interim cabinet,” his office stated in a press release.

This seemingly indicates that the governor intends to sign the decree to dissolve the Parliament and to call for elections, even though there is a new majority of eight in Parliament prepared to form a new government.

The collation of eight sent the William Marlin government home on Thursday with a motion of no confidence. The factions of the United People’s party, Democratic Party and MP Chanel Brownbill intended to take over, but the press release from the Governor now suggests that the people will have to go to the polls to elect a new Parliament.

On Thursday the Governor received a letter from Prime Minister Marlin wherein he tendered the resignation of all members of his cabinet and of the minister plenipotentiary in The Hague.

Governor Holiday also received a draft national decree to call elections and dissolve Parliament by the end of January 2018 from the Prime Minister.

Governor Holiday called upon the ministers to handle the daily operations of government and to continue working with him in the interest of St. Maarten until a decision has been taken about the request for resignation.

The Governor’s press release also mentions the willingness of a new majority in parliament to form a new government. In spite of this, the governor will now explore the formation of an interim-cabinet.

This scenario makes clear that the Governor intends to sign off on the national decree to dissolve the Parliament and to call for elections.

Based on a press release issued by the ousted Prime Minister Marlin, the Parliament will be dissolved on January 31.

That date seems to be a practical impossibility, because parties have to submit their lists of candidates between 80 and 90 days before the dissolution of the Parliament; counting back from January 31, 2018, that is between November 3 and November 13.

The elections then take place at least 48 days after the day the parties have submitted their lists of candidates to the Central Voting Bureau: between December 21 and December 31.

When the Marcel Gumbs government fell back in 2015, Gumbs also dissolved the Parliament and called for elections on February 9. The interim-cabinet led by William Marlin then pushed that date back to September 29, 2016.

Given how tight all these dates are, it is more than likely that an interim-cabinet will take a similar decision.

Interestingly, Marlin’s cabinet pushed the election date back for one reason only: to have electoral reform in place before the elections.

Marlin reasoned in 2015 that his predecessor had dissolved the Parliament to stop ship jumping.

“It is our firm belief,” Marlin said at the time, “That if we hold elections now without fixing the electoral laws, we won’t fix ship jumping. The elections would just create a new set of ship jumpers.”

Almost two years later, electoral reform legislation still is not in place; and ship jumping is alive and kicking.