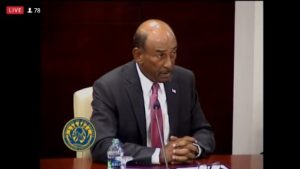 PHILIPSBURG – The government had 55.8 million guilders in liquid reserves – 35.7 million in its current account and 20.1 million in deposits, Finance Minister Richard Gibson Sr. said yesterday during a meeting of parliament’s central committee.

At the Central Bank there are remaining investment funds dating back to 2014 to the tune of 11.2 million, 21.7 million in capital investment funds for 2017 and 27.4 million that are remaining from the division of assets of the former Netherlands Antilles. The total reserves at the Central Bank add up to 60.3 million; combined with the current account and the deposits, there is 116.2 million in the piggy bank.

Minister Gibson said that his ministry had already provided reports about the budget depletion for the first and second quarter to the Parliament, but that the third quarter report will encounter delays. By law, this report must become available the latest six weeks after the end of the quarter.

Financial reserves other than equity are zero, the minister said. The government’s commitments until the end of the year are basically what is in the 2017 budget. Expenditures have increased due to payments for relief efforts after Hurricane Irma.

The Council of Ministers has in the meantime approved an amended budget for 2017; it is currently at the Council of Advice. Minister Gibson said that the budget will show a projected shortfall of 126.7 million guilders; this is also due to 50 million in additional expenditures caused by Hurricane Irma.

Minister Gibson said that the expected shortfall in the 2017 budget currently stands at 144.8 million guilders.

Next year the shortfall will rise to 248 million, before dropping back to 209 million in 2019.

“This is because in 2017 we had to work only four months under extraordinary circumstances; in 2018 it will be twelve months,’ the minister explained.

MP Perry Geerlings asked about the minister’s exact position, given the fact that had announced his immediate resignation last week in case the Parliament would approve a motion of no-confidence. He also asked how the government will handle reconstruction while it has to deal with a serious budget deficit.

MP Claret Connor asked how the government had set up an account to receive donations. “What is in place to accept foreign donations and how are these donors screened?” he asked. Connor later referred to the $105,000 donation offered by “the Chinese.”

MP Sidharth Bijlani asked which steps the government had taken to cut expenditures and whether businesses could expect some sort of tax relief, maybe in the form of a payment plan starting in January.  “Has any minister adjusted his budget without approval? was Bijlani’s last question.

MP Sarah Wescot-Williams asked whether the amount that remains at the Central Bank from the division of assets of the former Netherlands Antilles has been earmarked for capital investments. She also asked for a financial projection of the government-owned companies.

Minister Gibson will answer all questions during a meeting of the central committee on Wednesday afternoon, beginning at 2 p.m.