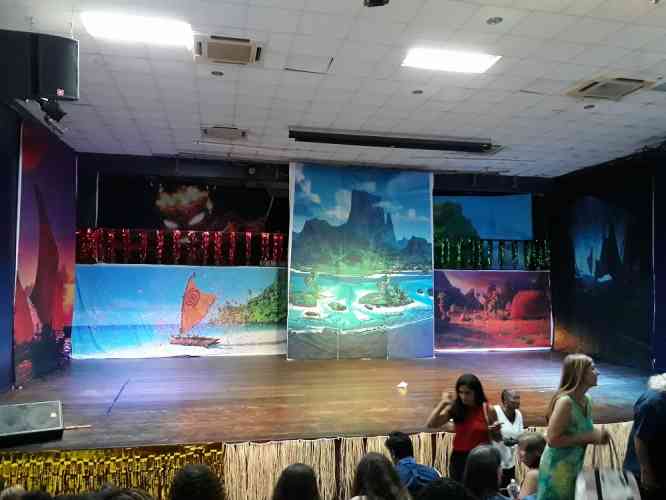 PHILIPSBURG — On Saturday, March 24th, 2018, the theater show Moana was opened by the show’s director, Susha Hien, who recounted how initially their first choice was to do Beauty and the Beast, but the Beast got cast to do another show. Then the choice fell to Moana. Susha had not seen the animated Disney movie, but when she was halfway into the first half of the show, she called choreographer Ihndhira Marlin and said they had to do Moana.

There was no doubt about it. After the experience the island went through with hurricane Irma, this was the right theater production to put on at the Philipsburg Cultural Center (see photo of stage above). Moana was just perfect, according to Susha.

So how do you turn an animated movie by Disney into a theater show on the Caribbean island of St. Maarten? Well for one, you let Ihndhira Marlin do the choreography. You let Susha Hien fuse elements from her jazz dance background into the show and you put the vivacious Marlo Maduro (see photo below) to star in the show as Moana.

What can we say about this dancer? Her lively, spirited, bubbly, ebullient, buoyant, sparkling, vibrant, zestful, energetic, effervescent and dynamic dance brings the character Moana wonderfully to life, captivating the audience, adults and children alike, with her exemplary performance.

The cast was outstanding and made use of every inch of the stage in the Philipsburg Cultural Center. With no movie theater currently operating on the island, the Moana theater show is a great alternative and not only offers the young cast members a great creative outlet, but also a much needed entertainment and distraction for their parents, family and friends as well.

The show’s message typified by Moana not being able to heed the call of the ocean to help her island survive is what Susha described as the reason why she felt the show was the perfect choice to put on in a post hurricane Irma recovery period. This is the true significance and importance of the show Moana for the people of island of St. Maarten. We all need to heed the call to help save and rebuild our island.

We encourage you to come out and see the show Moana for yourself. The next showing is today Sunday, March 25th, in the afternoon at 4pm. Then in the Easter weekend it will be held again on Saturday at 7:30pm and Sunday at 4pm. If the ocean is calling Moana, then Moana is calling you to see this wonderful show and you need to heed the call as well and go and see Moana. You will certainly be impressed by the beautiful choreography using human bodies to signify the ocean as a creative and effective way of utilizing the great ensemble of dancers from tots to teens.

Photo caption: Roll call by the theater show’s director, Susha Hien, as the cast line up to take their bow at the end of the Moana theater show. Photo by TR for StMaartenNews.com.