Home Local News Majority heads for motion of no confidence 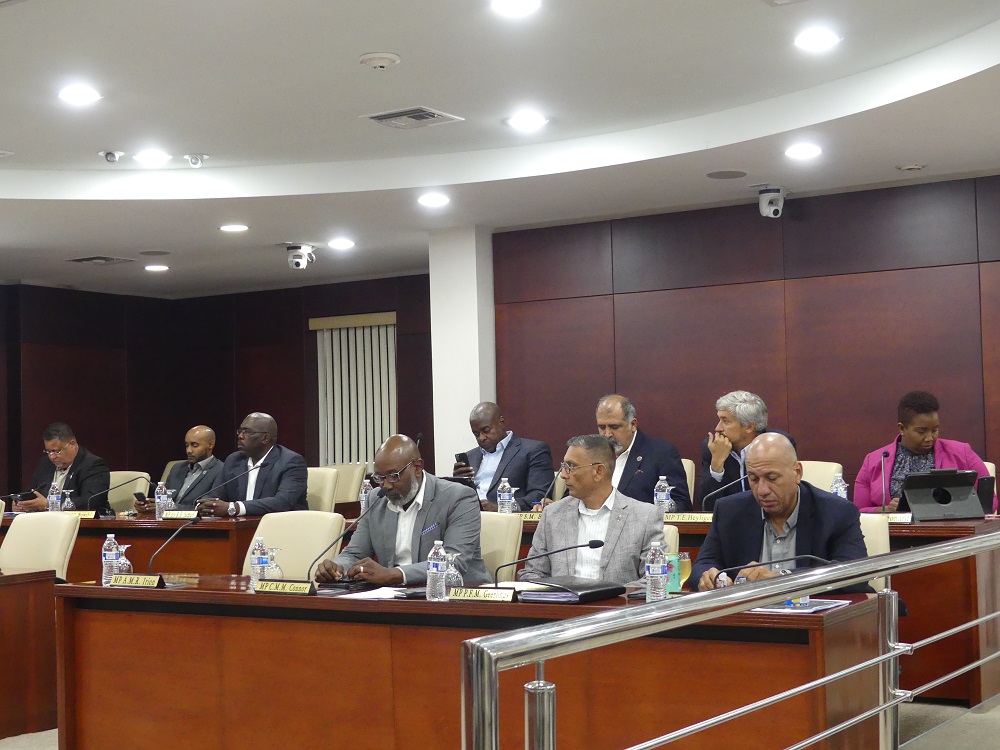 PHILIPSBURG – The new parliamentary majority of eight is heading for a motion of no confidence against the government led by Prime Minister William Marlin. It’s not a done deal yet, because Wednesday’s meeting of Parliament – scheduled to begin at 2 p.m. – was first adjourned until 5 p.m. and then further adjourned until Thursday morning at 10 a.m. after only three speakers had taken the floor.

MPs Claret Connor (UP) and Perry Geerlings (DP) made their positions clear, while MP Frans Richardson loudly tore into the critics of the Prime Minister.

When the Parliament passes its motion of no confidence on Thursday morning, Minister of Finance Richard Gibson Sr. will immediately tender his resignation, but Prime Minister Marlin is not going without a fight; he announced during Wednesday morning’s press briefing that he will take action to dissolve the Parliament and call for new elections.

MP Connor said that the Prime Minister had engaged in “a war of words” with the Dutch and that he had been “shoving people away instead of bringing them together” in the wake of Hurricane Irma.

Connor labeled the conditions the Kingdom government attached to financial aid for the reconstruction “non-issues” and noted that the Prime Minister initially was “hell-bent” on not establishing an Integrity Chamber. “Now he says that he was never against it. Who are you trying to fool?”

Connor referred to a motion tabled by DP-leader Sarah Wescot-Williams that was unanimously approved by Parliament and that called for among other things weekly consultation between Government and Parliament, strengthening of the bonds with the Kingdom partners and better relationships with the French side of the island. “None of that happened,” he pointed out.

That Marlin now agrees with the conditions that will unlock financial aid has only one reason, Connor said: “It’s about the position of William Marlin, now that his seat has become shaky.”

DP-MP Perry Geerlings said that he has lost confidence in the Prime Minister and that the motion of no-confidence that will be tabled is based on “convincing arguments.” He also said that “dissolving the Parliament should not be allowed.”

Geerlings said that the government was ill-prepared for the arrival of Hurricane Irma, that the Prime Minister had taken too long (48 hours) to declare the state of emergency, thus opening the door for massive looting.

The MP also referred to a statement by VROMI-minister Christophe Emmanuel that there is no place in the coalition for those who agree to accept financial aid from the Netherlands. “Damages have been done and credibility has been lost,” Geerlings observed. “It is inexplicable that manpower is used for flagpoles instead of roof repairs. And then there is the wheeling and dealing.”

With that last remark, Geerlings alluded to people “making money from separating the zinc.”

Geerlings furthermore said that there is no legitimate reason to dissolve the Parliament. “It is a shortcut to higher supervision, because an outgoing Parliament will not be able to handle controversial issues like the amendment of the 2017 budget.”

Geerlings ended his address with the statement: “I withdraw my support for this government.”

MP Frans Richardson (United St. Maarten party) tore into Minister Emil Lee (Public Health, Social Development and Labor), holding him responsible for the distribution of aid. “You don’t call him to Parliament but you do embarrass the Prime Minister,” he roared.

Richardson said that Lee voted in the Council of Ministers against payment to companies who executed the cleanup. StMaartenNews.com learned however that Lee’s objections had to do with inexplicable and unjustified invoices to the tune of 700,000 guilders.

Richardson furthermore said that the new majority had attempted to bring National Alliance MP Ardwell Irion to their side. “He told me,” Richardson emphasized, adding that “the people suffered due to a lack of leadership by the Minister of Social Development,” Emil Lee.

MP Richardson said that he is proud to be part of the government-coalition. “I believe that our government was on the right track,” he said.

Photo caption: The Parliament is in session on Wednesday afternoon. Photo Hilbert Haar