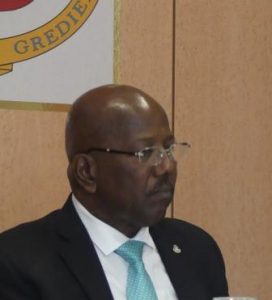 PHILIPSBURG – “How did we get there? Irma hit.” Prime Minister William Marlin is still reeling from the recent political developments that brought down his government, but he doesn’t think the hurricane had anything to do with it: “Something was already in the making to break up this government before the hurricane.”

Marlin went over recent political history since 2014, when the first red-white and blue coalition of NA, DP and USp fell apart due to the defection of DP-MP Cornelius de Weever. “We could have had an 8-seat majority with the USp at the time,” Marlin said.

But the red-white-and blue coalition only got into power in 2015 and it started “banging things around.” Marlin wasted no time on Wednesday to praise the – undisputed – achievements of his government. “St. Maarten was in a financial mess with sky high debts to pension fund APS and social and health insurances SZV. The new government building was empty. We brought financial discipline, solved those debts and the financial crisis and moved into the new government administration building.”

Marlin responded to what he labeled as “the cry for no elections,” saying that he had invited faction leaders for the formation of a national government before the motion of no confidence sent his cabinet home.

“After the meeting with the governor we decided that the talks would continue, but the Parliament still passed that motion of no confidence. Now they cannot complain today about the boulder that was rolling down the hill and caused the elections.”

Marlin rejected the complaint that aid is not coming to St. Maarten. “Emergency aid is continuing to come,” he said. “We have never rejected aid. Nobody in his right mind can say that the government did that. Our focus was on the bigger picture of recovery.”

Marlin said that the situation in St. Maarten is favorable compared to Saba, the French side of the island and Puerto Rico – all hurricane-stricken areas.

Marlin said that the phase of emergency aid will end at the end of this month. “You cannot blame this government and this prime minister,” he emphasized. We accepted the conditions and then the Netherlands wanted more guarantees. They sent us a document that had to be signed by all ministers and by all members of Parliament.”

How to avoid elections?

Asked whether there is still a possibility to avoid elections in January, Marlin said: Silveria Jacobs and William Marlin continue to believe in a national government. The willingness is there. The National Alliance is prepared to discuss a national government. And remember: we did not start this fight. It was action and reaction.”